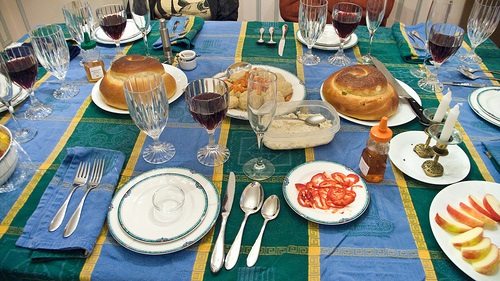 Rosh Hashanah, the celebration of the Jewish New Year, started Wednesday night, and Yom Kippur, the Day of Atonement, begins on October 3rd. Together, these are the High Holidays in Judaism, a time for looking forward to what the new year might bring and for contemplating—and repenting for—the past year. It is a time for giving to charity—tzedakah—though the real meaning of the act at this time of year isn’t simply having people of means write a check to help those with less, but to think and act about justice.

Given this past year’s spate of crises directly and indirectly affecting Jews and Judaism, the High Holidays should be a moment for asking some hard questions of ourselves regarding the intersection of principles of social justice and issues in the consciousness of Jews, both religious and secular, in the U.S. and worldwide.

Steven Davidson has written a compelling and emotional story about his summer in Palestine. Immersed among Palestinians, Davidson sees and hears both the Israeli arguments that he has long known and the concerns of Palestinians—and of the aid workers who have found their movement and services in the West Bank impeded by many restrictions and obstacles:

“Foreign aid workers are hardly welcome in the West Bank. The friends I had were forced to lie under the pretenses of their stays in Israel or face being turned away. Each time they leave, they fear they won’t be allowed back in. Suspicion of going to the West Bank leads to detention in the airport or on the border for hours, with the very possible result of being turned away…Members of Christian Peacemaker Teams—a human rights organization with funding from the United Nations—have had their credentials turned down at the border. Even when they get into the West Bank, there are risks. They have been arrested by the IDF for simply escorting Palestinian children to school to prevent violence from settlers and soldiers alike.”

While Davidson sees both sides, he has nothing positive to say about the West Bank settlers:

“The settlers are ideological extremists whose desire to cleanse the old city of Palestinians, supported by the soldiers, has no limits…I met a family who lived across from settlers in the old city of Hebron. They tried making fixes to their roof. For this act, the soldiers expelled them from their home. Any Palestinian home within 100 meters of a settlement is not allowed to make any repairs to their home of any kind. If they are found doing so, they are forced to leave. Thus, Palestinians are either faced with a slow, humiliating expulsion, or, a quick one. The homes are subsequently taken over by settlers. This is one of many tactics to expand the settlements. Homes have also been taken over in order to serve as Israeli military outposts, and unfounded claims have been made for homes to have ties to medieval or biblical Jewish figures, which is grounds for Palestinian expulsion.

“As a Jew, I am in no way going against my people. The Israeli government is not my people. It is a government that acts on its own and does good and bad things. For a government to claim any official religion does not shield it of critical thinking by those of that religion. The fact that these horrible acts have been done in my name distorts even further the truth of the matter. As a witness to the truth, what the Israeli government has committed in the West Bank is not out of security, and not out of self-defense. It is done out of an attempt to ethnically cleanse the region. It is done out of an attempt to pacify a people who have been denied their rights and land they have lived on for centuries. It is a system in which people are segregated and given separate identification based on ethnic background, subjected to differing laws, given unequal access to resources and infrastructure and have their rights taken away.”

People like Davidson are asking for a thought process during the High Holidays that incorporates considerations of social justice into our everyday life and doesn’t dehumanize people that some might think of as opponents or enemies. Peter Beinart, the well-known commentator on issues concerning the Israeli-Palestinian conflict in Gaza and the West Bank, penned a piece for Ha’aretz suggesting that during this year’s High Holidays, it would be truly valuable for American rabbis to focus not on issues of Israel and Zionism, but on the meaning of Rosh Hashanah and Yom Kippur and the biblical stories that underlie this time of year. Brooklyn-based organizer and founding member of #IfNotNow, Max Berger, writes in Ha’aretz that “For many young American Jews, it is not possible to speak on behalf of justice in Ferguson and remain silent as our community participates in denying freedom, dignity and self-determination to Palestinians.”

Just as we cannot give up on solutions for the violence and inhumanity in Ferguson that led to the police shooting of an unarmed black teenager, we should not forsake looking for avenues of peace and justice for Israelis and Palestinians. That might be some of the deeper meaning to think about when we go to shul next week on Yom Kippur and try to attach thought and commitment when we chant the prayer Kol Nidre.—Rick Cohen