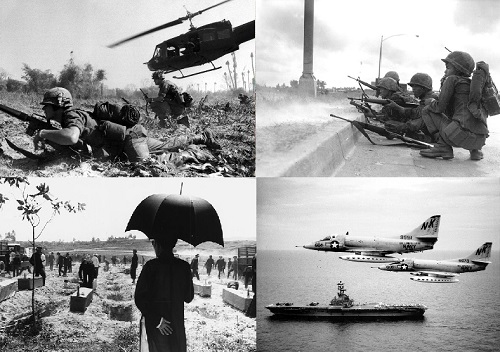 Last week’s “Lessons of Vietnam” program in Washington was not simply a commemoration of the end of the Vietnam War, but an effort to remember and recount narratives that would not have emerged from the effort of the Pentagon to tell its revisionist history of the war the U.S. lost. Don North, who covered the war for ABC News, reports that the Pentagon was working up a theory that the war was lost not because of U.S. misjudgments and mistakes, but because of “disloyal journalists” and a “misled public.” (North says that the Pentagon has since backed down on the bad-journalist/dumb-public explanation for the U.S. defeat by the North Vietnamese and Viet Cong.)

Last fall, 500 journalists, academics, and veterans took the Pentagon to task for attempting to issue a whitewashed version of the Vietnam War. Among the signatories to that complaint were the likes of Julian Bond, who helped establish the Student Nonviolent Coordinating Committee; Tom Hayden, who was one of the “Chicago Seven”; Peter Yarrow of Peter, Paul and Mary; Daniel Ellsberg of Pentagon Papers fame’ and Larry Korb, a former high level Defense Department official. All were at the #LessonsofVietnam program at the New York Avenue Presbyterian Church in Washington DC last week.

Despite the excellent #LessonsofVietnam discussions last week, there hasn’t been much discussion within the nonprofit sector of the fortieth anniversary of the end of the Vietnam War or the fiftieth of the “start” of the war. It seems odd that the nonprofit sector would be quiet on this subject when the Defense Department budget of today is eating up a huge proportion of federal budget expenditures, with leaders in both national political parties apparently signed on to giving the Pentagon more. It also seems odd, given that the bombing of Libya in 2011 (authorized by President Obama and his Secretary of State, Hillary Clinton) seems to have turned out counterproductive, making Libya look daily like a failed state along the lines of Somalia or Yemen and serving as a major point of embarkation of African and Middle Eastern refugees in dangerous boats, leading to thousands of deaths; maybe people don’t remember the people fleeing Vietnam in rickety boats and rafts as the U.S. decamped from its last Saigon stronghold. The continuing warfare in Syria, Ukraine, and other places also begs for the lessons that could and should come from an accurate historical analysis of America’s huge misadventure. The nonprofit sector might have many touchpoints of interest and contemporary application from an updated review of the Vietnam War history, both on the battlefields of Indochina and among the anti-war protests on the streets of this country.

An important read might be Jon Weiner’s piece in this week’s print edition of The Nation. He reports that after meeting with Hayden and members of a group called the Vietnam Peace Commemoration Committee, the Pentagon dropped its plans to develop educational materials for schools offering its revised history of the war in favor of a plan to honor Vietnam War veterans. There was plenty to scrap in the Pentagon’s plans (the Pentagon of President Obama and former Secretary of Defense Chuck Hagel), including

Weiner digs into what went into the Pentagon’s plans to commemorate the war, including its contention that it had 8,000 “partners” organizing commemorative events, raising questions of which partners and what events might be on that list.

Weiner suggests that rather than celebrate the 50th anniversary of the start of the war or the 40th anniversary of the end of the war by thanking Vietnam veterans, an apology is in order. He writes that the Pentagon might do better by saying to Vietnam veterans, “We’re sorry you were sent to fight in an unjust and futile war; we’re sorry you were lied to; we’re sorry you lost comrades, and years of your own lives, and that you suffered the aftereffects for many more years; we’re sorry the VA has done such a terrible job of taking care of you. On the other hand, we might say ‘thank you’ to the people who worked to end the war—and ask them to tell us about their experiences.”

Maybe that needs to be extended to the groups that are working today to bring America’s longest-ever military adventures in Iraq and Afghanistan to a close. As Kerry did with the VVAW in the 1970s, there are organizations today that involve active duty and recently returned veterans of Iraq and Afghanistan in trying to end America’s effort to continue those wars, even if U.S. presence is increasingly through proxy armies or high-tech military means rather than American “boots on the ground.” One is Iraq Veterans Against the War, not well known in many circles, but with some high profile advisory board members, including Daniel Ellsberg, Phyllis Bennis of the Institute for Policy Studies, and Anthony Arnove, who co-edited with the late Howard Zinn a primary source companion book to Zinn’s People’s History of the United States. Another might be Veterans for Peace, which has advisory board members including Andrew Bacevich, the brilliant military historian at Boston University, Chris Hedges, the Pulitzer Prize-winning journalist for the New York Times now writing for Truthdig, Bill Fletcher, the former president of the TransAfrica Forum, Ralph Nader, Jeremy Scahill, the author of Blackwater and a founding editor of the Intercept with Glenn Greenwald, filmmaker Oliver Stone, philosopher and Union Theological Seminary professor Cornell West, and again Bennis and Ellsberg.

These legitimate and important organizations, led by active duty military and recent veterans, should be better known, but the problem may be ours in the media. North cites the famous comment by Mark Twain: “If you don’t read the newspapers you are uninformed. If you do read the newspapers you are misinformed.” In the media of the nonprofit sector, we have to do better with coverage of the nonprofits whose programs of research, advocacy, and direct action are aimed at trying to avoid prolonged repetitions of the often-forgotten mistakes of the Vietnam War.—Rick Cohen

Writing from an Organic Place