Rent-to-Own: It’s Expensive to be Poor 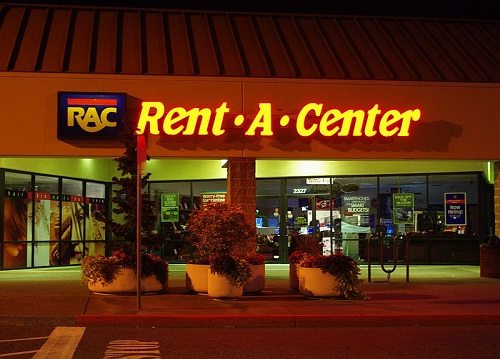 More and more people are living paycheck to paycheck and finding it impossible to save for big-ticket items. Without access to credit and no money saved, they are forced to turn to rent-to-own stores for these purchases. These stores often charge customers two to three times more than traditional stores for the same items, leading to more purchase defaults and low-income consumers remaining locked in their current income quagmire. Consumer rights organizations continue to fight against this industry with only moderate success.

The Great Recession increased the gap between the upper 2% and the lower 98%. More and more of these families depend on minimum wage jobs as their only sources of income. During the recession, many lost their homes, destroying their credit and denying them access to traditional loan or credit opportunities. Since these families’ incomes are barely enough to pay for rent, food, and transportation, most live on the financial edge, with little left over for a rainy-day fund.

Rent-to-own stores have been in existence for over fifty years, but have exploded since the recession. According to an industry trade group, there are over 8,600 rent-to-own stores in the United States, serving over four million customers and generating over $7.6 billion in revenue every year. They target customers with little credit and no savings. The stores sell a large assortment of big-ticket items and durable goods, including jewelry, electronics, and home appliances.

The purchase is a hybrid between a rental agreement and a purchase on installment. Customers pay for the right to use the item as they pay it off. Payments are made once a month, every other week, or even weekly. Unlike installment or credit purchases, a credit check is not required. The customer can terminate the agreement at any time by returning the item—that is, however, less common than repossession of the item by the store for lack of payment. Once the item is repossessed, the customer does not get any credit for payments made. Customers can also exchange items before the agreement is complete. In this case, the customer does not receive any credit for funds paid toward the returned item unless they enter into another agreement for a new item.

According to a law review article on the industry, about seventy-five percent of purchases from these stores were terminated within the first four months of purchase. The industry uses this risk to justify the extremely high fees and interest charged. For example, a $450-600 computer can have a final cost of $1,943.28.

Current state laws depend on whether the agreements are characterized as installment contracts or lease agreements. Many states mandate full disclosure of the agreement’s terms and require the store to identify full purchase price before the consumer enters into the agreement. Others require prior purchase history to be carried over to new purchases, so long as purchases are returned to the store and the new purchase is made within a certain period of time. Additionally, many states’ attorneys general have filed lawsuits against these stores for harassing customers, relatives, and neighbors during debt collection efforts, scaring children by telling them their parents will be jailed for failure to pay, and breaking and entering into customers’ homes to repossess items.

Consumer advocates have made modest gains against this industry, but have failed to stem the growth of these stores. In some states, consumer advocates are filing and winning suits against specific stores and practices. In 2007, consumers in New Jersey won a $109M settlement after the N.J. Supreme Court ruled rent-to-own contracts were illegal and violated the state’s 30% criminal usury law. Allied with the Consumer League of New Jersey, along with N.J. Public Interest Research Group, N.J. Public Advocate, AARP, and others, individuals collaborated to advocate for citizens in the lower income bracket. Further, only two weeks ago, the second-largest rent-to-own furniture store, Aaron’s Inc., agreed to pay $28.4 million to California customers after their Supreme Court found the store violated the state’s consumer protection and privacy laws by overcharging consumers.

Overall, these intimidating business tactics and high prices are similar to activities in the payday loan industry. Although consumers’ rights organizations continue to advocate for more protective laws and file suits in states with more protective laws, in the end, as long as more traditional methods of purchasing these items are closed to this growing group of consumers, most have little choice but to continue using this risky and extraordinarily expensive option.—Gayle Nelson