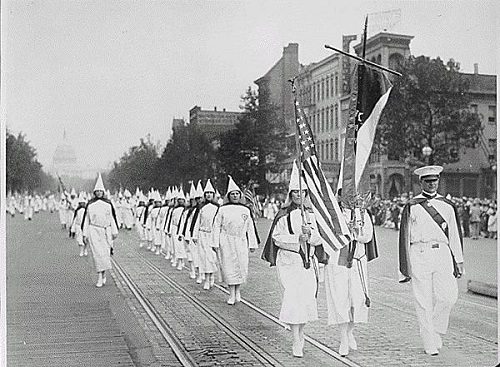 Lots of people call their opponents kooks, crazies, reactionaries, Nazis, commies, and more. But in Florida, Democratic representative Alan Grayson is raising money with a fundraising appeal that suggests that the Tea Party is like the Ku Klux Klan. His email shows a burning cross as the “T” in Tea Party.

The text of the fundraiser is from an interview of Grayson conducted by Rev. Al Sharpton. The Grayson fundraising email describes the American public as “appalled” by the Tea Party and desirous of “the Tea Party out of their lives.” It declares the Tea Party as “no more popular than the Klan.” The email appears to conclude with this statement:

It’s not the first time that Grayson has laid out the Tea Party. On his campaign website, there is a link to these comments he gave in an interview with Salon. Talking about the shutdown, Grayson said, “The Tea Party emperor has no clothes—that they never should have, or could have, forced their idiocy on the other house of Congress, or the other branches of government. That their blackmail and extortion and coercion has been recognized for exactly what it is. It’s never made any sort of sense or had any moral strength to say to America, as they’ve said, ‘If you don’t let us steal your car, we will burn down your house.’ They tried to steal the car, which was Obamacare, under threat of burning down the house, which is the U.S. economy…. This will prove, once and for all, beyond any doubt, that the Tea Party and the Republican Party are agents of chaos. And they are completely unsuited to participating in government.”

Defending his fundraising email’s description of the Tea Party after criticism from Republicans, Grayson went further in a statement: “Regarding the image that the campaign circulated, members of the Tea Party have engaged in relentless racist attacks against our African-American president. For example, when the president visited my home of Orlando, Tea Party protesters shouted ‘Kenyan Go Home.’ Other examples include Tea Party chants of ‘Bye Bye Blackbird’ and Tea Party posters saying ‘Obama’s plan: White Slavery.’” The Grayson statement also said: “Tea Party members have circulated countless altered pictures depicting President Obama and the First Lady as monkeys. Tea Party members also called my fellow member of Congress, civil rights hero John Lewis, a ‘n***ger,’ and Rep. Barney Frank a ‘faggot’…. One could go on and on, because there is overwhelming evidence that the Tea Party is the home of bigotry and discrimination in America today, just as the KKK was for an earlier generation. If the shoe fits, wear it.” (Other sources have said that the last line in the Grayson statement was, “If the hood fits, wear it.”)

This is tough stuff for the Tea Party crowd, some of them registered as 501(c)(4) organizations, and their supporters, such as FreedomWorks and the National Republican Congressional Committee, which demanded apologies.

This is one for our readers: What do you think of Grayson’s calling out the Tea Party as the KKK for today’s generation? On target, and appropriate for the racial vitriol that has been attributed to Tea Party types? Or inappropriate and polarizing at a time when civil political discourse is sometimes in short supply?—Rick Cohen