Reparations, Warranted or Not, Won’t Prevent the Next Ferguson 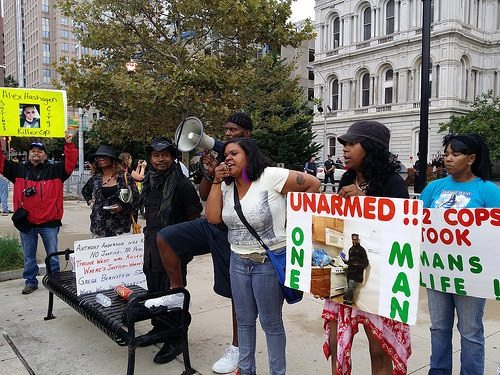 Belinda Cooper of the World Policy Institute asks how the U.S. will avoid future Fergusons. She takes on issues of racial justice broadly rather than the narrower questions of what specifically happened between unarmed teenager Mike Brown and Ferguson police officer Darren Wilson. Her argument calls for “transitional justice” predicated on this country’s history as a “human rights abuser”:

“The transitional justice process encompasses methods focused on the victims and the wider society, such as truthseeking, memorialization, education, institutional change, and material compensation—that is, actions that seek not only to punish, but to encourage a shared historical understanding, begin to repair the damage done, and ensure that it can’t happen again.”

The first step, she says, is “official acknowledgement,” much like what the nations of the world got from Germany following World War II regarding its responsibility for the Holocaust and what Armenians have been attempting to get from Turkey in response to that nation’s genocidal actions a century ago. “Official silence negates the experience of the victims,” Cooper writes, “but it’s also damaging to perpetrator societies; it feeds denial and false narratives of history that allow tensions and resentments to persist.” That seems to mean an official apology, like the one President Reagan issued in response to the internment of Japanese-Americans during World War II. Nothing similar has been done for African-Americans or, for that matter, Native Americans, she says.

Cooper adds that a necessary next step is financial reparations. Reagan, for example, provided financial compensation to the survivors of Japanese internment camps. She points out that her father, a Holocaust survivor, received a small monthly check from Germany. Agreeing with Atlantic writer Ta-Nehisi Coates, Cooper contends that the most significant compensatory scheme generated by the U.S. for black Americans was affirmative action, but the Supreme Court has consistently whittled down the scope and substance of it. Reparations in response to the disproportionate incarceration of black Americans have largely not been addressed, she contends.

The challenge, of course, is that the more distant the original injustice that created the need for acknowledgement and reparations—the 1930s­–1940s Holocaust for Germans; the 18th and 19th centuries for slavery in the U.S. and the subsequent Jim Crow era—the less likely people today feel responsible for making the reparations. Cooper writes, “One of the most important aspects of successful transitional justice, therefore, lies in illuminating not only the victims’ suffering, but the ways in which an entire society continues to bear the burdens of history.”

It may seem academic to some, but within the nonprofit and academic communities, there is a movement for reparations. For example, Mary Frances Berry, a former chairperson of the U.S. Commission on Civil Rights, has endorsed the idea of a “reparations superfund” to be capitalized by “institutions and corporations that profited from slave labor [and]…banks and insurance companies that had been guilty of racial discriminatory practices, such as redlining and predatory financial lending.” This debate isn’t new. Leaving aside historical references to the efforts of freed slaves to get reparations from the U.S. after the Civil War, the modern reparations debate can be traced to the writings of TransAfrica founder Randall Robinson, including The Debt: What America Owes to Blacks.

Unfortunately for Cooper’s argument, a resolution of the reparations debate, if a resolution should ever emerge, is too late for current and near-term future Fergusons. The issues facing black Americans in terms of the economic and social inequities that were clearly abundant and largely ignored in suburban Ferguson are here now and likely to get worse while the nation tries, if it ever does, reversing the Supreme Court’s reversals of affirmative action or other mechanisms of reparation. Whatever the merits of reparations, the nonprofit and philanthropic sectors have to be active now in helping communities build the civic infrastructure to serve as the means for the black communities of inner-ring suburbs—many similar to Ferguson—to mobilize, to vote, to address the conditions that led not only to poverty and distress, but that allowed a policeman to pump almost a dozen bullets into the body of an unarmed teenager who, by all eyewitness accounts to date, was basically surrendering. (The Justice Department appears ready to launch a civil rights investigation of the police forces of Ferguson and surrounding communities.)

Whether made to black Americans who can trace their ancestry to slaves (as some advocates of reparations suggest) or more broadly to black Americans who experience the socio-economic inequities that show up by race in this country, reparations as a benevolent gift to individuals doesn’t overcome the lack of civic infrastructure that allowed a situation like suburban Ferguson to evolve over decades.—Rick Cohen