Republicans Give More to Charity Than Democrats, but There’s a Bigger Story Here 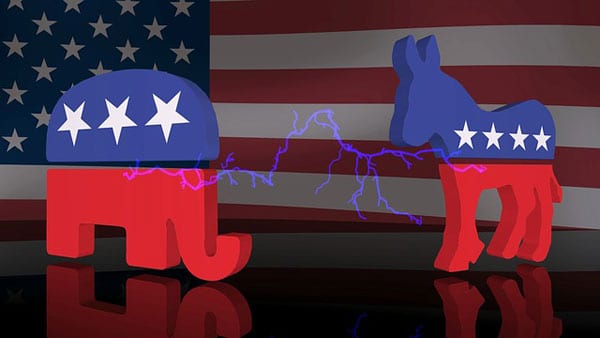 The political differences between Republicans and Democrats don’t play out solely at the ballot box; they also predict how likely people are to donate to charity. This finding from a newly published research project reflects a key difference, one tied to political affiliation, about how our nation should take on critical social issues like homelessness, poverty, and health care. The data also suggest that in times of political strife, both parties’ supporters pull back, making problem-solving harder.

Using voting and IRS data for the residents of 3,000 counties across the nation, the four-professor research team found, according to the New York Times, that counties which are “overwhelmingly Republican” report higher charitable contributions than Democratic-dominated counties, although “giving in blue counties is often bolstered by a combination of charitable donations and higher taxes. But as red or blue counties become more politically competitive, charitable giving tends to fall.” The full study was recently published in the Nonprofit and Voluntary Sector Quarterly.

One could conclude this shows the Republican party is, despite the conventional wisdom, the party that cares about those in need and puts its money where its mouth is. But the true picture is more complex, reflecting at best a real difference between the parties in the best way to approach the challenge of human need. Because the range of organizations and activities that are supported by tax deductible giving is very wide, it is not clear how these funds are actually used or what motives they reflect.

Republicans do give more, but where that money ends up is not yet clear. One of the study’s authors, Rebecca Nesbit, associate professor of public administration and policy at the University of Georgia, told the New York Times that Republicans prefer to “provide for the collective good through private institutions. But we don’t know what type of institutions they’re giving to.” It also wasn’t obvious “whether donors were being purely generous or whether they would also benefit from their donation. This relationship is called consumption philanthropy, in which people give to a religious organization or a school from which they will derive a benefit in the form of, say, a better religious education program or a new gymnasium.” Giving to a food bank or a homeless shelter has a very different outcome than does giving to a private school.

While red counties may be more philanthropic, tax rates are higher in blue counties, reflecting stronger support for collective action and for a social safety net of services and organizations. “The county you live in and the political ideology of that county affects the tax burden of the community,” Dr. Nesbit said. “That in turn has an effect on charitable contributions. If you leave tax burden out of the equation, you’re not getting the full story.”

Importantly, the study did not find that in Republican counties, private funds replaced public funds so that social services were equally supported.

Those in favor of lower taxes have argued that individuals are more capable than the government of allocating money to important causes, including people in need of assistance. But the study found that was not true. Donations do not match government assistance, and without tax money, social services are not funded as robustly.

Most concerning in this moment of high political strife is the finding that everyone pulls back in areas where political division is high: “When counties are split evenly between the political parties, both donations and the tax burden go down. Or in the study’s terms: Political competition decreases giving.” This does not bode well for organizations whose work is holding up a part of the social safety net, nor for the people they serve.

As we see very graphically on a national level, split electorates and the split governments they elect have difficulty enacting polices and laws to support democratic approaches to collective action. The publicly funded portion of the safety net weakens. If Republicans, who may be more individually ready than their Democratic neighbors, do not make growing charitable donations for these same purposes, philanthropy will not provide the solution, either.—Marty Levine