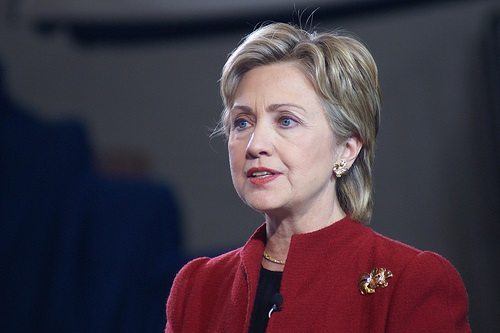 It isn’t news that Bill Clinton and Hillary Rodham Clinton have charged hefty speaking fees for some of their appearances. It is news that they have taken in some $11.7 million as speaking fees from nonprofit groups.

Politico’s Kenneth Vogel points out that Hillary Clinton’s approach to nonprofit speaking fees differs from that of her predecessor, Condoleezza Rice. Secretary Rice, Vogel reports, got $60,000 in 2009 for a luncheon appearance at the Boys and Girls Club of Long Beach and then, according to multiple sources familiar with the club’s finances, gave “almost all” of the fee back to the sponsor. Secretary Clinton got $200,000 from the same group for the same event five years later and gave nothing back to the club. Instead, her speaking fee went to the Clinton Foundation. Vogel adds that Rice’s appearance raised twice as much as Clinton’s for the Long Beach charity.

The $11.7 million take represents the cumulative speaking fees of the Clintons since the end of the Clinton presidency. The providers of the speaking fees ranges from groups such as Chicago House, an AIDS service provider, to trade associations, large universities, and public policy advocacy groups.

In fairness to the Clintons, these are all different kinds of nonprofit entities. The list of nonprofits that paid the Clintons to speak is a motley group of 501(c)(3) public charities, 501(c)(4) political entities, and 501(c)(6) business and trade associations, and organizations of very different sizes, with the speaking fees, much like the Clinton Foundation’s disclosures of donations, given in ranges:

The diversity of these groups, despite most of them possessing 501(c) tax designations, means they’re not quite in the same place in the nonprofit taxonomy. A political entity such as AIPAC is quite different from an AIDS provider or a Catholic family counseling center. It isn’t necessarily true that the Clintons are sucking money out of tiny, struggling public charities, either—even the Boys and Girls Club of Long Beach raises around $2.8 to $2.9 million annually, and Chicago House’s 2014 revenue was $6.6 million. On the other hand, Vogel cited “fundraising experts and people affiliated with some nonprofits on the list” who felt that the Clintons charged “hefty” fees that were a “significant drain on small charities’ fundraising.” One such expert, a nonprofit fundraising coach named Marc A. Pitman, said, “I don’t know of any other foundation that collects speaking fees.”

Even here, however, it is necessary to distinguish types of organizations. The Clinton Foundation isn’t an endowed foundation, but raises money through donations and, as news accounts have explained in the past few months, through the Clinton’s large speaking fees, paid because charities expect that big-name star power will power their fundraising events. (Note: If any NPQ readers find the CEOs of this nation’s large, endowed private foundations charging speaking fees, please let NPQ know.)

Vogel adds that a “small charity called the Happy Hearts Fund, which rebuilds schools destroyed by natural disasters, donated $500,000 to the Clinton Foundation in conjunction with a Bill Clinton speech at its 2014 gala, only after trying unsuccessfully to get him to appear for free.” NPQ didn’t see Happy Hearts (raising roughly $3 million annually) on the list of nonprofits paying for a Clinton speech.

Readers probably know that charities don’t often land the likes of Bill or Hillary Clinton to utter a few words at a fundraiser. The Long Beach Boys and Girls Club, for example, obviously has juice, having landed other speakers along the lines of Henry Kissinger, Tony Blair, Rudy Giuliani, and former presidents Gerald Ford and George H.W. Bush, Vogel reports. But big speaking fees often mean limited fundraising totals. That partially explains the Boys and Girls Club’s low return on the Clinton speech compared to Rice’s, in that paying Secretary Clinton $200,000 undoubtedly ate into the fundraising luncheon income.  Many charities expect that their big name speakers like Rice and Clinton will give back some or all of their fees, but Secretary Clinton didn’t do so. However, Clinton turned over her speaking fee to the Clinton Foundation for its philanthropic activities as opposed to pocketing it as personal income, as Bill Clinton did when he spoke at the Club in 2007.

Apparently, unnamed sources close to the Boys and Girls Club weren’t happy that Secretary Clinton gave her speech (closed to the media) and “took off without visiting any of the club’s facilities to meet the children who benefit from its services.” As Vogel notes, “By contrast, Rice spent the morning before her speech (which was open to the media) touring a club facility and talking with its children about the importance of staying in school and chasing their dreams.” Hillary Clinton’s dream is now the White House, which means that she might not be spending time touring charity facilities in a state like California that is already check-marked for the Democratic presidential candidate in 2016.

In her 2008 presidential campaign against an upstart unknown first-term senator from Illinois, Hillary Clinton voiced enough support for the policies and programs that charities rely on to warrant her “I ♥ Nonprofits” recognition. But looking to other charities (not trade associations! Charge them the going rate, Hillary!) for six-figure speaking fees that she can use to help fund her own foundation feels a bit self-obsessed and less than generally charitable.—Rick Cohen