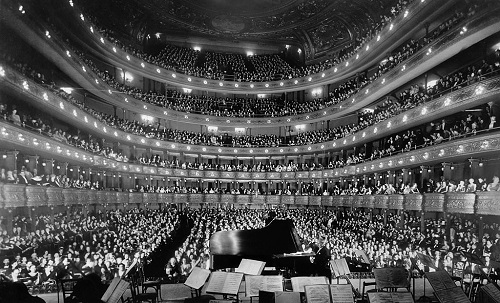 As reported last week in NPQ, the Metropolitan Opera and 15 of its 16 workers’ unions have reached the dwindling days of their current contracts, which expire July 31st. In a July 23rd Wall Street Journal report, General Manager Peter Gelb, who for months has insisted that the Met’s 2,437 union employees must make significant concessions if the company is to regain its financial footing, said he was close to reaching agreements with several of the smaller unions, but “wasn’t close with any of its three major unions, which represent singers, orchestra members and stagehands.” He suggested union workers should brace for a lockout beginning August 1st.

On July 25, in an elaborate defense of themselves and a stinging attack on Gelb and “his long-planned lockout,” the union representing the Metropolitan Opera Orchestra, Local 802 of the American Federation of Musicians, struck back, issuing a news release and an 84-page document outlining what they consider to be Gelb’s mismanagement of the company’s finances. The report goes to great lengths to make a case that the “Met Orchestra is the hardest-working orchestra” among its peer organizations and that “Met Orchestra musicians are solidly middle class” (at least by New York City standards). The full report can be found here on the website of the union’s public affairs firm, Geto & de Milly, Inc.

While the report raises some important questions, it is so clearly a self-serving analysis of the situation that at times it’s nearly impossible not to hear violins swelling in the background as one flips through its pages. Only page 84 offers alternate solutions to the Met’s financial woes, and those are squeezed into one crowded table, unlike the many painstakingly detailed charts used throughout the document to make the case against Gelb (and only against him—no other staff members are singled out, and no mention is made of the board’s role in any decisions).

In this June 27 article from the Los Angeles Times (previously cited by NPQ in a newswire about the broader challenges facing opera companies), Mark Swed opined that Peter Gelb “has the hardest, most contentious job in all of opera, trying to keep a massive ship afloat and getting attacked on all sides.” He noted that he does not agree with all of Gelb’s decisions, but wondered about the validity of labor rules under which “a stagehand can wind up taking home more than $450,000 a year.” He further observed about the Met’s contract negotiations:

The unions insist on maintaining the most generous salaries, benefits and work rules in the business. They have accused Gelb of mismanagement for his attempts to keep up with the times by presenting interesting new operas and new productions rather than counting on a crowd-pleasing, potboiler aesthetic. This need not be taken seriously.

Swed also suggested that the Met’s $325 million annual operating budget—with labor costs accounting for about $200 million, a “massive” 3,800-seat venue and seven performances a week throughout the eight-month season—simply may not be sustainable in the 21st century as costs continue to escalate and donations continue to decline. He said the company recognized as far back as the 1970s “the perils of unregulated operatic growth.” Alternate business models, including the creation of a “mini Met” for small-scale productions, have been proposed over the years—most recently by Gelb when he became general manager in 2007. While similar models have proven successful for other opera companies, at the Met they’ve never been tested because of resistance from the labor unions. Unless there’s a big breakthrough in the contract negotiations over the next few days, everyone involved may have plenty of time to contemplate alternate business models and other, less appealing scenarios for the future of the Met. –Eileen Cunniffe