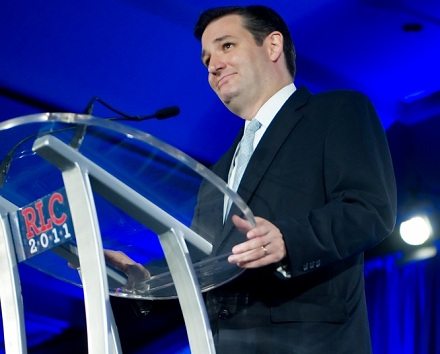 Here’s a first: How often do you hear scions of the Tea Party movement calling for campaign finance reform that includes disclosure of donations to the third party groups that finance political attack ads? Republican Senate candidate Ted Cruz was a big upset winner in the primaries over the Texas Republican establishment’s preferred candidate, and he is widely seen as evidence of the Tea Party’s continuing election influence—and Sarah Palin’s, as Cruz credits his surprise victory to his endorsement by Palin. Cruz says he wants to scrap the current system of campaign finance, particularly the funds that flow to 501(c)(4)s (which are not required to disclose the sources) and that wind up being donated to super PACs. Cruz’s idea is to eliminate all limits on direct donations to political campaigns of any sort and to “require immediate disclosure.”

“What happens now is they [donors] can’t write the check to the campaign so they write them to a third party who run ads, and I can’t talk to the third party and so this third party super PAC is running ads supporting me. I have no input in what they say,” Cruz told Politico. “It’s a ridiculous system.”

Cruz seems to be arguing that the limits on giving to candidates or candidate committees drive donors to put their additional moneys into PACs and (c)(4)s. For individuals, the current limits on donations to federal campaigns are: $2,500 to each candidate or candidate committee per election; $30,800 to the national party committee per year; $10,000 total to state, district, and local party committees per year; and, overall, a biennial limit of $46,200 to all candidates and $70,800 to all PACs and political parties. However, there are no limits on donations to 501(c)(4) social welfare organizations. The Cruz proposal would take the caps off campaign contributions in general and require full and immediate donor disclosure, it appears, for donations to candidates, parties, and PACs, which are currently required to disclose, and for 501(c)(4)s, which are allowed to keep their donors’ names and amounts secret.

If momentum doesn’t get going to overturn the Supreme Court’s Citizens United decision, might Cruz’s suggestion for allowing unlimited money directly into campaigns, PACs and (c)(4)s—so long as there is real-time disclosure—be a productive alternative? Do the Tea Party groups that got IRS approval for their (c)(4) operations realize that their newest star favors having them reveal exactly who funds them and for how much?—Rick Cohen