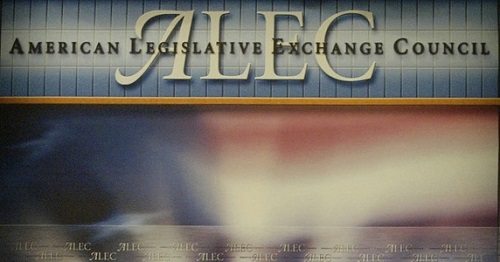 Molly Jackman, a research fellow at the Brookings Institution, has published a useful compilation of exactly what public policies the secretive American Legislative Exchange Council (ALEC) actually pursues in its agenda that, for nearly everyone except ALEC spokespersons, constitutes lobbying.

Jackman confirms a point that the National Council of Nonprofits’ Tim Delaney has made in recent speeches: The real legislative action is in state legislatures, which is the arena where ALEC concentrates. State legislatures passed 29,000 laws in 2012. For the 2011–2012 legislative session, the number of bills enacted ranged from a low of 142 in Ohio to a high of 1,582 in Texas, but only 120 bills were passed in the U.S. Congress. Delaney’s estimates for state legislatures in 2013 are even higher, and for Congress, even lower.

“Given the pervasive gridlock in Congress, key legislative change is occurring predominantly in the states,” Jackman writes. “It is, then, all the more important to know who is affecting which bills are introduced in the state legislatures, and which bills pass.” Her analysis is an attempt, using text analysis, to figure out which of these state laws are based on ALEC model legislation.

Jackman’s conclusions: “First, ALEC model bills are, word-for-word, introduced in our state legislatures at a non-trivial rate. Second, they have a good chance—better than most legislation—of being enacted into law. Finally, the bills that pass are most often linked to controversial social and economic issues.”

Jackman tracked the language of 169 model ALEC bills in nine ALEC task force topical areas introduced in 2011–2012 and found 132 actual bills that appeared to be attributable to ALEC. Contrary to our expectation of ALEC as an almost exclusively Republican instrument, Jackman discovered that Democrats sponsored almost 18 percent of the ALEC-linked bills. The states with the most ALEC legislative introductions were West Virginia (10 ALEC bills), Oklahoma (9), Mississippi (9), Arizona (8), Kansas (7), and Montana (7).

The strategically reoriented ALEC may have moved away from gun rights and “castle doctrine” bills, but in the 2011–2012 cycle, nine state legislatures saw the introduction of the “Castle Doctrine Act” (stand-your-ground legislation) making it among the most common ALEC-themed bill in state legislatures. Other common ALEC bills in state legislatures were the “No Sanctuary Cities for Illegal Immigrants Act” (creating a crime of trespassing on state land without immigrant status and a crime of having undocumented immigrant in one’s vehicle) and laws that would prohibit local jurisdictions from independently regulating possession of firearms and preempt local jurisdictions from bringing civil actions against firearm manufacturers or dealers. Jackson says that nine percent of the ALEC bills—12 out of 132—were enacted (a thirteenth was vetoed by the New Hampshire governor). That’s not a high rate of passage, but much higher than that of Congress, where many bills enacted are not particularly controversial, like the naming of post offices.

Our guess is that, having been burned by ALEC’s overly close association with social issues such as stand-your-ground, corporations will be reluctant partners of ALEC’s unless ALEC focuses on corporate bread-and-butter concerns such as taxation and regulation.

Corporations may be itchy about their ALEC connections, but for many legislators, ALEC’s research and model bills give them useful tools for their conservative legislative agendas. In Wisconsin, for example, roughly a third of state legislators may be ALEC members, while in Georgia, the proportion is 38 percent. Overall, ALEC’s website claims over 2,000 members, the vast majority of whom are legislators, since foundation and corporate members total only around 300. If you’re a state legislator, perhaps serving part-time with very limited staff support, having ALEC generating model bills, background research, and talking points is a valuable asset.

The narrowing of ALEC’s agenda away from hot-button gun control and crime issues doesn’t mean that ALEC’s reach is all that narrow. For example, as we have reported earlier, ALEC is making a big push into such education issues as promoting school choice legislation and for-profit higher education. While the Affordable Care Act calls for expanded Medicaid coverage, ALEC is calling for huge cuts in Medicaid. Jackman’s research is a roadmap on where ALEC has been, but with directions for where ALEC might go in the future on a variety of issues of concern to corporate America.—Rick Cohen