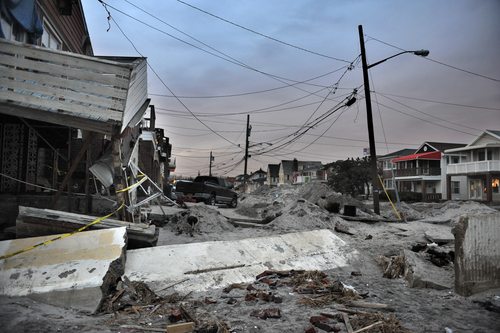 After Hurricane Sandy, mesh networks were spread around Red Hook by volunteers to increase area bandwidth so victims could communicate with their families and loved ones during the crisis. Drones flew over the Washington State mudslides, reading the landscape and creating 3-D imagery that was used to make command decisions. Ride-sharing apps were created by the FIT team in conjunction with a Drupal conference, resulting in assistance in Oklahoma following a major tornado.

“I don’t know of any time in history where a federal agency like FEMA has tasked a team to innovate in a disaster and to solve in real time like this on the scale that we did,” says Desiree Matel-Anderson, former Chief Innovation Advisor with FEMA and current “Chief Wrangler” at FIT.

As an incubator of technological innovations, there’s a variety of “robotic animals” in development at FIT. While these are generally used in disaster recovery, FIT received phone calls requesting aid during the recent border crisis wherein young people from Central America were seeking refuge in the U.S. There was enough food and shelter, but resources were needed to help entertain and educate the children. The result was a “robotics petting zoo,” with children interacting with rolling, crawling, and flying robots.

FIT is preparing to take its zoo to South by Southwest (SXSW). An intro video featuring “Bujold,” “Survivor Buddy,” and “McCaffrey” and their skills can be found here: