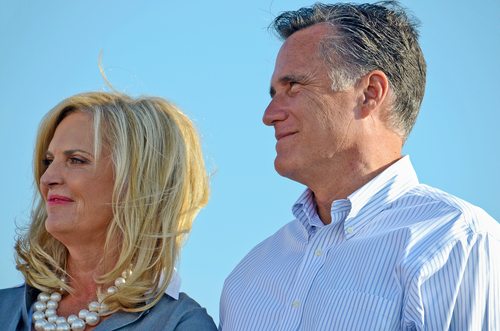 Mitt Romney got sort of a bad rap during the last presidential campaign. He wasn’t nearly as dull as his campaign performance and ads made him seem, and he wasn’t as right wing to the degree that the right wing of the Republican Party pushed him to be. Let’s face it; he invented the Affordable Care Act in Massachusetts, no matter how much he denied it while on the stump.

Now that he seems to have been freed to be himself in the wake of his crushing loss to President Obama, he has reemerged in the political sphere, endorsing mainstream Republican candidates to offset some of the Tea Party momentum, taking center stage—center for the Republican Party, that is—as George W. Bush and his father studiously avoid involvement in the party’s internecine battles.

But Romney also wants to be respected as a thought leader of sorts. He is convening the third of his now annual policy retreats in which major political actors, including putative presidential candidates, show up to portray themselves as serious on policy issues.

According to the Washington Post, some 200 people plan to show up in Park City, Utah for the Romney retreat in June. Among the luminaries will be potential nominees Chris Christie, Mike Huckabee, Paul Ryan, and, notably, Rand Paul, the latter apparently trying to win a half point or so with the Republican establishment.

Equally important as the politicians showing up will be the campaign financiers and bundlers, such as Spencer Zwick, a national finance chairman for the Romney campaign and private equity business partner of Romney’s son Tagg, and Bob White, Romney’s former business partner.

However, Romney’s move into thought leadership means that this year’s retreat is being pitched as nonpartisan. The evidence for that is a little thin. Does the invitation of Peyton Manning make the event nonpartisan? Perhaps the implication is that Romney, as a former Massachusetts governor, was not so partisan as to invite New England Patriots’ quarterback Tom Brady.

Also cited as evidence of nonpartisanship is Romney’s invitation of Sacramento mayor Kevin Johnson, a Democrat who was a visible supporter of Obama in 2012. A former star guard for the Phoenix Suns in the NBA, KJ’s political influence seems to be on the rise. This year, he was elected as president of the U.S. Conference of Mayors, a prestigious position that will elevate Sacramento’s profile. He was also recently selected by NBA players to be in charge of recruiting the National Basketball Association’s players’ union’s new executive director.

But nonpartisan doesn’t mean “not ideological.” Johnson has generated his share of controversy within the Democratic Party, including some level of opposition from the teachers’ unions because of his strong support of charter schools. In fact, his nonprofit, St. HOPE, created a K-12 charter school with the help of seed money from the Bill and Melinda Gates Foundation. At St. HOPE, Johnson was compelled to repay roughly half of $847,000 it had received from the Corporation for National and Community Service as a settlement for allegedly having misspent AmeriCorps grants and education awards between 2004 and 2007. (In 2008, St. HOPE’s eligibility for future CNCS awards was ended.) A controversial part of the story involved the fate of the CNCS inspector general, Gerald Walpin, who was fired by the Obama administration after his report documented that AmeriCorps money meant for tutoring, urban redevelopment, and theater programs had instead been used “to pad staff salaries, meddle politically in a school-board election, and have AmeriCorps members perform personal services for Mr. Johnson, including washing his car.”

Republicans criticized the Obama administration’s supposed punishment of Walpin and purported kid-gloves treatment of Johnson, but KJ may have been able to boost his standing in Republican circles as a result of his marriage to Michelle Rhee, the conservative icon of school privatization and opposition to teachers’ unions. After leaving her position as chancellor for the Washington, D.C. public schools, Rhee created an advocacy organization called Students First, which has been actively involved in political campaigns around the nation, supporting candidates who favor privatization and school choice regardless of their political party affiliations, though Students First has been particularly generous toward Republican candidates. The board of Rhee’s organization is full of luminaries, including Bill Cosby, Connie Chung, former Democratic Congressman Floyd Flake, Mayor Michael Bloomberg’s former public schools head Joel Klein, ESPN announcer and former NBA player Jalen Rose, and CNN political commentator Roland Martin. In her book Radical and in subsequent writings, including one piece titled “My Break with the Democrats,” Rhee has made her political leanings pretty clear.

Is Kevin Johnson in the largely mainstream Republican mix of Romney’s retreat invitees because of his Conference of Mayors leadership role, his St. HOPE nonprofit track record, or because of his association with and allegiance to the vigorous proponent of school privatization and opponent of teachers unions, Michelle Rhee?—Rick Cohen