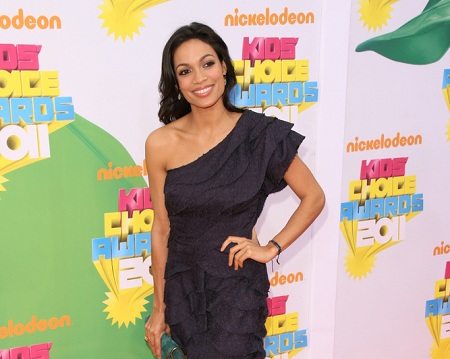 Actress Rosario Dawson, the co-founder of the nonpartisan, nonprofit Voto Latino, attended the Democratic National Convention last week to voice her support for the Latino community as well as undocumented immigrants. Dawson was spotted in the crowds shouting, “Education not deportation!” through a megaphone, gripping an “UNDOCUMENTED” banner.

Dawson is well rounded in her philanthropic efforts and is involved with numerous charities working on causes ranging from environmental issues to domestic violence awareness to LGBT rights. The actress told Huffington Post, “For all the activism I do, everything falls under the umbrella of voting and so it’s great for me to be able to talk and interact with young people…and seeing their face light up, it’s all about imagination and opportunity and seeing yourself in something.”

Dawson co-founded Voto Latino in 2004. The nonprofit mobilizes Latino communities to let their voices be heard by “engaging youth, media, technology and celebrities to promote positive change.” According to its website, Voto Latino members were also present at the recent Republican National Convention. The group has reportedly registered more than 12,000 Latino voters and is currently encouraging Latinos—widely seen as a highly-coveted swing vote demographic this year, as in other recent years—to get out to the polls and vote in this coming election. –Aine Creedon