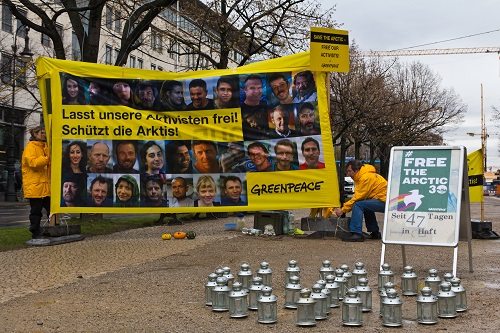 Growing concern about the Putin government’s stance on human rights and civil society in Russia was insufficient to cause any effective boycotts of the Winter Olympic Games, set to start in Sochi in February, but in an apparent attempt to quiet some of the criticism, the DUMA has granted amnesty to a number of individuals considered to be political prisoners. This amnesty appears to include the activists arrested as the Arctic 30 and two members of Pussy Riot, a collective of feminist activists that were arrested for hooliganism last year for a protest that decried the link between the church and state.

Unfortunately, this action may paper over the image that the Putin government has been accumulating for suppression of dissent, but it does not come close to addressing the whole of what has been seen as problematic. This includes demands that human rights organizations taking foreign money register as “foreign agents”; the trying of anti-corruption crusader Sergei Magnitsky, who died (before the trial) in custody; and homophobia and persecution of gay or “different” people increasingly codified into law. We could go on.

That may be why neither President Obama, nor Vice President Biden, nor any former U.S. president is scheduled to attend the Games. Who are scheduled to attend as delegates of the U.S., however, are tennis star Billie Jean King and hockey star Caitlin Cahow, two openly gay athletes. That action might best be summed up as nice, but insufficient.—Ruth McCambridge