Saudi Prince to Give $32B to Charity 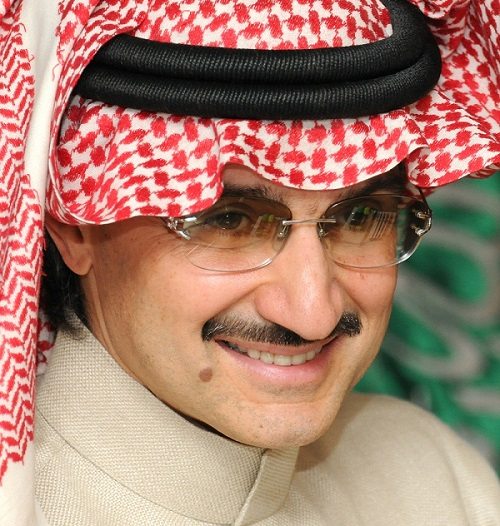 Saudi Prince Al-Waleed bin Talal, one of the world’s richest men, announced last week that he would give away his entire fortune, estimated at $32 billion, to charity. Prince Al-Waleed is a direct descendant of the founder of Saudi Arabia, King Abdul Aziz Al Saud, and a nephew of the present monarch. His mother was the daughter of the first prime minister of Lebanon. His business interests traverse the Middle East and the Western world.

Amongst significant interests, he is a major shareholder in Twitter and in Apple. He has been a major shareholder in Fox Corporation, though he recently reduced his stake. Rupert Murdoch and son James, nonetheless, continued to be investors and active supporters of the Prince’s entertainment company, Rotana. The prince owns such luxury hotels as Paris’s fabled King George V Hotel and the New York Plaza. He has extensive property investments in Saudi Arabia, where he is currently constructing what will become the world’s tallest building.

The size of Al-Waleed’s fortune is of great pride to him. He famously sued Forbes for miscalculating his fortune and publishing what he considered to be an amount less than his true worth. He has also taken great pains in the past to insist that his fortune is self-made and not a proxy for Saudi royal family wealth.

By Saudi public standards, he is undoubtedly a liberal. He has been an exponent of women’s rights. His Saudi holding company employs more women than men. He employed Saudi Arabia’s first woman pilot and first woman jockey. Women working with the prince are not expected to wear the traditional Saudi veil.

Announcing his intention to leave his wealth to charity, the prince said:

“I have had the opportunity to witness, firsthand, the challenging conditions of many communities across the globe, firsthand, and have stood among those who were suffering and in great need. I have also learned of overwhelming obstacles through meetings with the leaders of countries and communities around the world.

“I am making this announcement today as an illustration of God Almighty’s blessings, following His words in the Holy Qur’an: ‘But tell of the favors of your Lord.’”

The full text of his pledge announcement speech is available from Gulf News.

Prince Al-Waleed has supported philanthropy for more than 35 years, donating $3.5 billion thus far through his Al-Waleed Philanthropies. One gift that created a controversy was made in the wake of the 9/11 Twin Tower attacks. The then-mayor of New York City, Rudy Giuliani, rejected a donation of $10 million from the prince because he issued a press release that stated, “The United States of America should reexamine its policies in the Middle East and adopt a more balanced stance towards the Palestinian cause.”

At the press conference in Saudi Arabia announcing his commitment, Al-Waleed said that since the size of his fortune is so “immense,” he intends to have it distributed globally, although the priority will be Saudi Arabia and the rest of the Arab region.

“This will go to humanity, which has no religion, no race and no sex. The radius of our contribution will cover the whole globe, not just [Arabs or Islamic countries],” Al-Waleed said.—John Godfrey