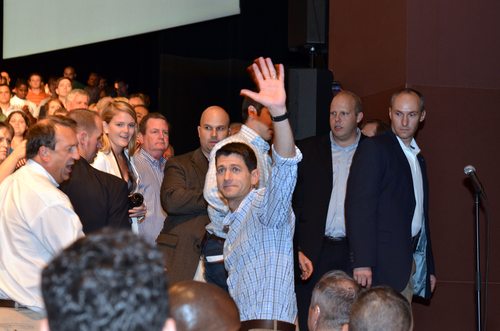 In the latest issue of the Philanthropy Daily, Bill Schambra, the director of the Hudson Institute’s Bradley Center for Philanthropy and Civic Renewal, pens a typically erudite and eloquent retrospective on President George H.W. Bush’s “points of light” program and a prospective on the community renewal thinking of congressman and former vice presidential candidate Paul Ryan.

Prompting this essay was President Obama’s invitation of the first President Bush to the White House for the award of the 5,000th Daily Points of Light Award, a program that has been continued by Bush’s successors. Schambra recounts the origins of the points of lights program, which includes his own contribution, as evinced by an influential paper he wrote back then. In contrast to the top-down concept of a “national community,” Bush tracked the theme of Schambra’s paper that this nation is a “nation of communities, of thousands and tens of thousands of ethnic, religious, social, business, labor union, neighborhood, regional and other organizations, all of them varied, voluntary and unique…a brilliant diversity spread like stars, like a thousand points of light in a broad and peaceful sky.”

Schambra remembers the “nation of communities” sentiment articulated by Bush as heartening but inauthentic, due to his “lack…[of] genuine roots in…everyday local communities, where most Americans live and wrestle with their mundane problems” and the fact that his entire professional career involved working with “the massive, bureaucratic government institutions that virtually define centralized federal domination of American public life.” He concludes that Bush’s points of light efforts ended up as “little more than a serendipitous rhetorical coup” followed by “an equally disappointing foray by George W. Bush into ‘faith-based initiatives.’”

Looking forward, Schambra finds more hope in Congressman Paul Ryan’s ideas for a “civic renewal agenda,” emanating from some statements he made on the campaign trail (we noticed at the time that Ryan, unlike others on the two tickets, specifically mentioned or addressed the issue of poverty) and his “Conservatism and Community” speech from last May. Schambra draws his confidence in Ryan’s sincerity on civic and community renewal from Ryan’s community-minded upbringing in small-town (actually, small city) Janesville, Wisconsin, in contrast to the Bushes’ West Texas milieu of wealthy oil tycoons. That gives him hope that Ryan’s words aren’t mere “rhetorical flourishes.”

However, Schambra also cautions, “National political figures have proven themselves so inept at promoting the civic renewal agenda that one might conclude it’s impossible for them to do so without causing more harm than good.” That certainly seems to be the case in recent history, from “points of light” through “compassionate conservatism” to the current administration’s “social innovation” emphasis.

Whether Rep. Ryan would be more committed than other national politicians to grassroots community problem-solving is unclear by his policy prescriptions that relate to community nonprofits. While, according to Schambra, Ryan may be motivated by the principal of “subsidiarity,” which says that social issues are best addressed by the smallest, least centralized authority possible—in this case, leaving decisions to the family and neighborhood, as opposed to government—Ryan’s national policy proposals as represented by his federal budget ideas would not necessarily lay the groundwork for making that community-level problem-solving possible. Neither philanthropy nor government provide much support for community-based mediating institutions to address social problems, preoccupied as they are with scaling up rather than building local capacity. The Ryan budget proposals, along with much of current fiscal policy today, significantly reduce funding that might be available to the community organizations that are positioned to engage in community-level problem solving.

Ryan’s Janesville background raises some concerns as to what he thinks is possible at that lowest possible level of community problem-solving. As of the 2010 census, Janesville was more than 90 percent white, with only 2.6 percent black, 5.4 percent Latino, and 1.3 percent Asian. The poverty rate in Janesville is roughly half or less than the poverty rate of the nation. The relative homogeneity of Janesville contrasts with the demographics of much of America, where racial and economic inequities play out in population and geography. While decentralizing to the community or neighborhood level for decision-making is crucial for long-lasting successes, resources for reinvestment and community revitalization cannot simply be imagined into existence. For the many places unlike Janesville—try Janesville’s Wisconsin neighbor Milwaukee, which is now the fourth-poorest big city in the U.S., topped only by Buffalo, Cleveland, and Detroit—those community-level problem solving structures need resources, not the top-down funding extraction that is embedded in the Ryan budgets that Republicans in Congress have repeatedly supported.

Our advice to Schambra is this: Ryan’s words, like Obama’s and Bush’s and others’, are fine, but regardless of their potential sincerity, nothing works better than communities mobilizing to demand that government—and philanthropy—invest more than rhetorical flourishes in grassroots community entities and their community problem-solving capacities.—Rick Cohen