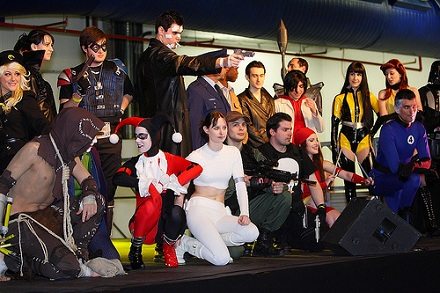 A reader’s tip about this article about sexual harassment at the “Readercon” sci-fi convention made us reexamine an issue about the Penn State affair that might concern nonprofits. Readercon is a science fiction literature convention run totally by volunteers. Unlike Comic-Con, which the NPQ Newswire mentioned recently, Readercon is not for cosplayers or computer gamers and doesn’t display anime- and manga-derived sci-fi artistry. It’s about science fiction writing and writers.

This year’s Readercon has generated a vigorous blogosphere debate over one convention-goer’s report of sexual harassment by sci-fi author Rene Walling and this allegation about Walling led to another Readercon attendee reporting additional incidents also attributed to Walling.

It seems the open dynamic of conventions makes the possibility of harassment a real problem. Readercon has a zero-tolerance policy on harassment, but in the case of Walling, its definition of zero-tolerance was to suspend his Readercon membership for “at least” two years. The online reaction has been stridently critical of Readercon’s board.

This Daily Dot article was an eye-opening introduction to the nonprofit-sponsored or volunteer-operated fan conventions, with links to scads of blogs, tweets, and more. We found not only vigorous debate about Readercon, but also the Con Anti-Harassment Project meant “to encourage fandom, geek community and other non-business conventions to establish, articulate and act upon anti-harassment policies, especially sexual harassment policies.”

We don’t know the details of the charges against Walling other than what was written in the Daily Dot and a couple of other blogs (such as posts by Genevieve Valentine here and here and Mike Glyer’s post here) nor do we have any information about Walling’s explanation or defense other than this statement from the Readercon board of directors referencing an expression of contrition on Walling’s part.

Think of a much more heavyweight institution like Penn State. It receives substantial funding from taxpayer-supported governmental agencies ($900 million) and charitable donors ($300 million), not to mention millions more from student tuition and fee payments. School officials have said that Penn State’s general liability and officers-and-directors liability insurance policies will cover all anticipated costs from litigation, so that donors, students, and taxpayers won’t be footing the bill for the blowback from the Sandusky convictions involving incidents that occurred on Penn State property or allegations of cover-ups by Penn State officials. However, reports are that the insurers don’t agree. The Pennsylvania Manufacturers’ Association Insurance Company, which has covered Penn State for decades, has told the Philadelphia Inquirer that it doesn’t intend to pay for Penn State’s costs in expected victims’ lawsuits, citing limitations and exclusions in its policies concerning claims of “bodily injury and mental anguish,” “intentional acts,” and charging that school administrators covered up their knowledge of Sandusky’s criminal acts, which the insurance company argues is another reason it should not have to pay.

Has your nonprofit checked out its liability coverage recently? –Rick Cohen