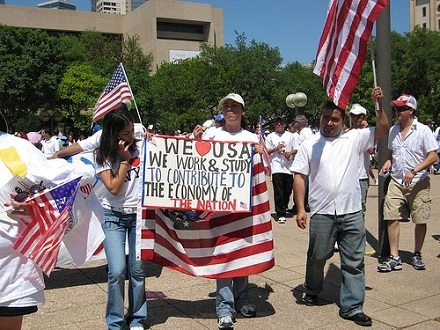 “Today the LULAC national membership reaffirmed its commitment to equality for all by voting in favor of marriage equality,” Jesse Garcia, LULAC member and co-founder of the organization’s first LGBT Council, said in a statement. “LULAC stands with great Latino leaders like Dolores Huerta, San Antonio Mayor Julian Castro and Labor Secretary Hilda Solis who believe discrimination of same-sex couples should not be tolerated. This is a historic day for LGBT Latinos everywhere, plus this vote is another bond that reaffirms the partnership between the LGBT and Hispanic communities.”

The statement released by the group also affirms its support of President Obama’s statement in favor of marriage equality for lesbian and gay couples.

“Since its inception, LULAC has fought for the equality of minorities,” said Brent Wilkes, LULAC Executive Director. “All individuals, regardless of their race, ethnicity, country of origin or sexual orientation, deserve equal rights. Everyone should be granted the freedom to marry their partner be protected under the same laws that are established for heterosexual couples.”

The LULAC meeting drew over 20,000 participants from all over the country including top leaders from government, business, and the Hispanic community. LULAC and NCLR’s unabashed support of equality for lesbian, gay, bisexual, and transgender people flies in the face of claims that Latinos are homophobic and against the LGBT community.—Erwin de Leon