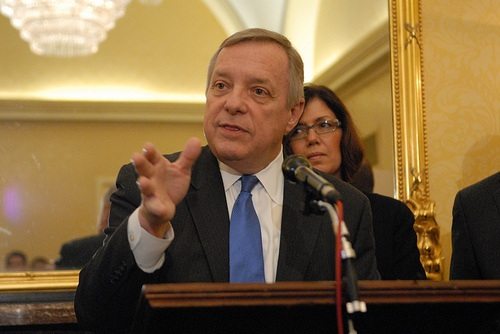 Recently, Senator Dick Durbin (D-Ill.) sent a letter to some 300 organizations he believes to be financial supporters of the American Legislative Exchange Council (ALEC), a conservative think tank registered as a 501(c)(3) public charity.  The letter asked the respondents to confirm whether they were members of ALEC or financial contributors to ALEC and whether they supported the “stand your ground” legislation that ALEC has promoted nationwide.

Durbin’s August 6 letter may be the strongest assault on 501(c)(3) confidentiality in quite some time.  In an op-ed published in the Chicago Tribune, Durbin defended his request against charges that he was violating rights of free speech and aspects of nonprofit confidentiality:

ALEC and its corporate and organizational supporters have every right to participate in the political process. My concern is with the lack of transparency. As a public official, when I take a position, I stand up to explain and defend it. I file annual financial disclosures, campaign finance reports and have to face the scrutiny of public opinion.

ALEC, however, has been secretive about its members and donors for years. It hides behind its nonprofit registration in order to obscure who actually stands behind its model laws.

This is about transparency.

Alabama Attorney General Luther Strange joined one of the recipients of the letter, the Alabama Policy Institute, in denouncing the Durbin request.  Ironically, they cited the 1958 U.S. Supreme Court decision in NAACP v. Alabama, in which the court overturned Alabama’s request for the NAACP to reveal the names of its members.  AG Strange also linked the Durbin request to recent controversies concerning government oversight of conservative organizations:  “The emerging trend of Washington officials targeting conservative groups in Alabama is both disturbing and unacceptable,” Strange said.  “My office will stand with Alabama organizations like the Wetumpka Tea Party and the Alabama Policy Institute against viewpoint discrimination and political intimidation by the federal government.”