Senator Warren: Banks Should Disclose Their Grants to Think Tanks 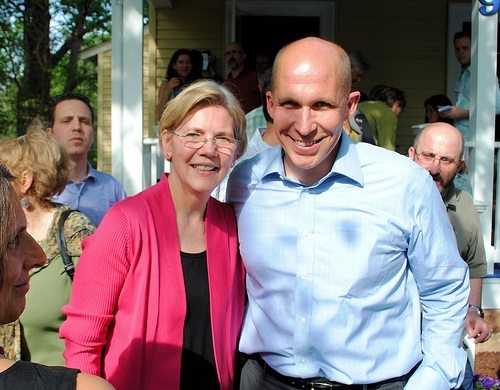 Senator Elizabeth Warren (D-MA) directed her challenge to banks, but it actually raises a question of broader corporate disclosure of their “charitable” giving. In a letter to the CEOs of the nation’s six largest banks, Senator Warren called on banks to voluntarily disclose their donations to influential think tanks.

As the CEOs of public companies, you have an obligation to expend corporate resources only in ways that advance the interests of your shareholders. For that reason, I believe your shareholders have a right to know both which think tanks your companies are supporting and the extent of that support so that they can assess for themselves whether they benefit from these contributions.

Writing for the Washington Post, Lydia dePillis implied that Warren was motivated by a front-page article in the Wall Street Journal written by Jon Cowan and Jim Kessler of the centrist-oriented group Third Way criticizing her economic populism (and that of newly-elected New York mayor Bill de Blasio) as potentially “disastrous for Democrats.” The Nation’s Lee Fang revealed some linkages of the Third Way to the banking sector, primarily through a Third Way-employed consulting firm, but the notion that Warren’s letter was a tit-for-tat response to Cowan and Kessler makes her seem petty, which is hardly her reputation.

Warren’s letter doesn’t seem petty, doesn’t reference Third Way, and is addressed to banks that don’t have an immediately overt connection to the centrist think tank. Rather, she is making an argument that banks are making undisclosed donations to policy shops that advance the banks’ interests camouflaged by the notion that they are providing independent, nonpartisan analysis. As NPQ’s coverage of the American Legislative Exchange Council has shown, it’s not just big banks putting money into 501(c)(3) policy advocacy organizations. Just recently, Google posted a list of almost 100 policy think tanks that it has contributed to, but without any information about how much money it has given each. ALEC’s list of corporate supporters actually suggests that ALEC hasn’t done well with solicitations to financial sector firms compared to its greater success in other corporate sectors.

While not petty, Warren’s letter is, from a policy context, thin. Given her inclusion of Morgan Stanley and Goldman Sachs in her addressees, Warren could have also included American International Group (#7), General Electric Capital (#8), Bank of New York Mellon (#9), U.S. Bankcorp (#10), HSBC (#11), PNC (#12), Capital One (#13), and TD Bank (#14) among the largest holding companies listed by the Federal Reserve. What would make their donations of any less interest to the public and to shareholders than those of the top six?

Surely Warren knows that voluntarily disclosure is relatively worthless. DePillis noted that “When sunlight shines on one dark corner, those who don’t want to be seen flee to another,” and of course there are many dark corners for corporate donors in which they can hide donations that are made directly by the corporations, which do not need to be disclosed, as opposed to donations from corporate foundations which are disclosed in their Form 990s.

Representative Alan Grayson (D-FL) introduced a bill in the 113th Congress—H.R. 1112, the Corporate Propaganda Sunshine Act—which would require corporations to disclose expenditures of $1,000 or more “for the purpose of influencing public opinion on any matter other than the promotion of the issuer’s products or services.” The brief bill doesn’t explain how the Securities and Exchange Commission, under whose aegis this information would be compiled, would determine how expenditures for influencing public opinion would be defined. Most corporations would in all likelihood simply refer the SEC to their required lobbying filings. Grayson’s bill and Warren’s letter take aim at disclosure of spending that is other than their campaign contributions or their donations to 501(c)(4) social welfare organizations, but how Grayson would compel or Warren would cajole big corporations into disclosing their political giving to 501(c)(3) think tanks isn’t clear.

Grayson and Warren know that the last significant legislative effort to compel corporate charitable disclosure, addressing the public and shareholder concerns that Warren referenced, actually came from a Republican, Paul Gillmor of Ohio, who regularly introduced a bill to that effect in the late 1990s and early in the 2000s, but found himself relatively isolated from both Republicans and Democrats as potential supporters. Something akin to corporate disclosure was included in the version of Sarbanes-Oxley passed by the House of Representatives, but was removed in conference committee. Given the growth of corporate power in American politics, perhaps now is the time to return to the Gillmor bills and compel disclosure of giving that has corporations funding nonprofits to do their bidding.—Rick Cohen