I’m so happy to bring you our first story produced by an outside contributor. Reporter Jennifer Collins’ investigation was made possible by the generosity of Tiny Spark’s Kickstarter backers.

It’s a story about a pair of young Harvard graduates who said it was possible to harness the world’s love for soccer to generate electricity for poor kids.  They called their product the Soccket, formed a for-profit company, and began selling it to corporations and foundations in the U.S. and around the world. Co-founder Jessica Matthews launched the Soccket back in 2008, saying she had helped develop a soccer ball that converts kinetic energy into power. Just a half hour of play would generate three hours of light.

The idea captured the imagination of the media and influential leaders alike. Matthews’ company, Uncharted Play, was among Inc. Magazine’s 25 Most Audacious Companies.  Bill Clinton described it as “extraordinary” and hailed the ball as “an off-grid solution that gives us a way to bring power and improved quality of life.” Last year, during a trip to Tanzania, Barack Obama tried the Soccket out. “You can imagine this in villages all across the continent,” he was quoted as saying.

But we wanted to know: what do kids think of this toy that’s meant to improve their lives? And a year after they were distributed in Mexico, how has the celebrated product held up for children who need a safe and reliable source of light?

We sent Mexico-based freelance reporter Jennifer Collins to follow up with children who had received the Soccket. She traveled seven hours outside of Mexico City to Cuetzalan, in the state of Puebla, where two-thirds of the population live in poverty.

Collins interviewed ten families who had received the Soccket. One of those she met was 12-year-old Celina Martinez Lopez. She lives in a two-room shack with six other people. The family has no electricity. Celina told Collins she was excited when she received the Soccket a year ago because she would have a source of light for doing her homework at night. The Soccket worked the first couple of days after she got it. “The third day, the light went out,” she said.

Celina wasn’t alone. Eight of the ten families Collins visited said their Socckets lasted anywhere from just a couple of days to a few months. An Uncharted Play spec sheet said the balls would last for three years.

Children in Mexico haven’t been the only recipients let down by the Soccket. Last year, Uncharted Play launched a Kickstarter campaign as a way to fund mass production of the Soccket. Saying “we finally have a version of the SOCCKET that we’re happy with,” the company raised more than $90,000 through the crowdfunding website. Uncharted Play began sending Socckets to its Kickstarter backers in January. Some of those who received them have been complaining of chipping paint  and report that the electric component is not working: 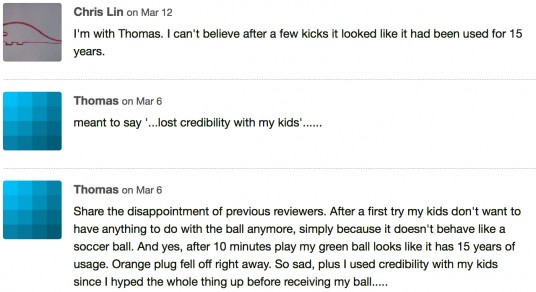 Matthews responded to the complaints, posting an update on Kickstarter that said “We became aware of the durability issues with the ball, resulting in scratches or material damage after limited amounts of play.” She promises backers that a new, improved Soccket is shipping soon.

A representative from Uncharted Play told Collins that they are continuing to tweak the product and have plans to distribute 50,000 Socckets a year all across the globe.

UPDATE: Uncharted Play, the company that produces the Soccket, issued a press release on April 23, 2014. “I was surprised and heartbroken when I learned of the quality issues with the SOCCKET,” says Jessica O. Matthews, CEO and Co- Founder of Uncharted Play. “But as soon as we found out about the durability issues, we reacted swiftly, and have been working diligently to address the issues internally and with our overseas partners. We know that our product has a profound impact, and now we know what it takes to make a great product. I not only look forward to continuing our mission, but sharing with other social inventors and entrepreneurs the lessons we’ve learned.” Uncharted Play says it is “launching an open online platform, where we can share regular updates on the production and manufacturing of our products.” The full text of the press release is available here.

This story was brought to you in conjunction with our partners at PRI’s The World.