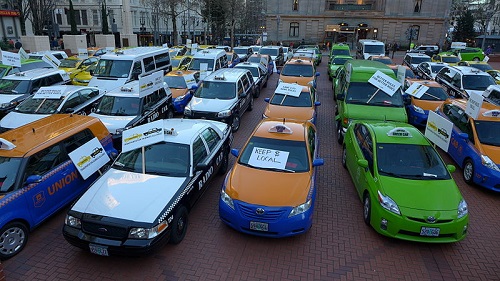 The boundaries around the definition of social enterprise are more than a little porous, as social enterprise advocates themselves readily admit. So, is Uber, the ride-share business, a social enterprise? In a paper about the “radical power of Social Capital,” Barbara Gray gushes about Uber and the hotel alternative Airbnb:

“How is it that Airbnb and Uber have been able to build thriving ecosystems in just over five years with such significant scale and influence that they are now valued at $10 billion and $12 billion? And how have these companies become such a disruptive force that they are the target of deafening protests from the highly ensconced hotel and taxi industries in cities around the world?”

Her answer is that Uber and Airbnb are prototypical “social sharing companies” with a “social mission” that “are able to access all three social value drivers: Advocacy, Connection, and Collaboration. The revolutionary power of Airbnb and Uber comes from their ability to harness technology to create a social sharing platform that facilitates trust by creating transparency and dual accountability. This enables individuals to form weak ties (i.e., Bridging Social Capital) with one another, leading to the personal sharing of goods and/or services (i.e., Linking Social Capital).”

Uber D.C.’s Zuhairah Scott Washington told a digitalundivided “Innovation Thursdays” audience last year that the Uber model is something of a “savior and defender of urban communities,” according to PandoDaily’s David Holmes, who heard Scott extol Uber’s ability to allow people without skills or training to make upwards of $20 an hour and customers to get service where they wouldn’t have before.

Other observers aren’t quite so enthusiastic about Uber. Avi Asher-Schapiro writes about unhappy Uber drivers where the risk is really on the drivers, not on the corporation. After explaining how Uber drivers can be “de-activated” if they don’t get high enough positive ratings (“de-activated” is Uber for “fired”), he interviews several Uber drivers who have lots of criticisms to offer in private while they feel compelled to say positive things in public. As expressed by one who didn’t share his full name because of fear of retribution, “Uber takes 20 percent of my earnings, and they treat me like shit—they cut prices whenever they want. They can deactivate me whenever they feel like it, and if I complain, they tell me to fuck off.”

Uber calls its ride-share operators “partners.” However, as Asher-Schapiro explains:

“Drivers aren’t partners—they are laborers exploited by their company. They have no say in business decisions and can be fired at any time. Instead of paying its employees a wage, Uber just pockets a portion of their earnings. Drivers take all the risks and front all the costs—the car, the gas, the insurance—yet it is executives and investors who get rich.

“Uber is part of a new wave of corporations that make up what’s called the ‘sharing economy.’ The premise is seductive in its simplicity: people have skills, and customers want services. Silicon Valley plays matchmaker, churning out apps that pair workers with work…Under the guise of innovation and progress, companies are stripping away worker protections, pushing down wages, and flouting government regulations. At its core, the sharing economy is a scheme to shift risk from companies to workers, discourage labor organizing, and ensure that capitalists can reap huge profits with low fixed costs.

“There’s nothing innovative or new about this business model. Uber is just capitalism, in its most naked form.”

Asher-Schapiro notes that the Uber model discourages collective action by the drivers in that they are technically in competition with each other, but Uber drivers have started to organize in response to Uber’s unilateral rate cuts. In Seattle, they have organized the Seattle Ride-Share Drivers Association, and in Los Angeles the California App-based Drivers Association affiliated with the Teamsters.

In Congress, the labor protections for Uber drivers don’t seem to be a huge concern. Sen. Al Franken (D-MN) is concerned, according to an article produced by the Center for Public integrity in conjunction with TIME magazine about Uber’s commitment to rider privacy, but he is a client of Uber himself. Franken is one of 775 federal politicians and political committees that have spent $278,000 on 7,625 Uber rides during the 2013-2014 election cycle. The Center reports that the increase in Uber use corresponds with a “precipitous” decline in the use of traditional taxis.

Among Uber’s labor challenges is a recent lawsuit in Massachusetts alleging that Uber cheats its drivers out of out-of-pocket expenses that a corporation would typically pay for (gas and car maintenance, for example), while denying its drivers overtime despite their working longer than 40-hour weeks. Uber achieves this by calling its drivers “contractors” rather than employees. Taxi companies whose drivers are employees are hardly happier with Uber than Uber’s drivers.

One would think that pro-labor Democrats would have a problem with the idea of a technology company like Uber redefining the corporation-labor dynamic and avoiding much of labor law protection. Uber, however, has been recruiting Democrats to its side. Obama advisor David Plouffe has signed on with Uber as an advisor and lobbyist. Sen. Cory Booker (D-NJ) lauds Uber as a prime example of the “democratizing force of technology.” Jim Messina, who ran Obama’s reelection campaign, has publicly called Uber “one of the most innovative companies in America.” That makes sense for Uber, as Messina is a paid consultant for the company. He is also a leader in the Priorities USA Action Super PAC that is supporting Hillary Clinton’s presidential campaign.

So is Uber a hip, new, revolutionizing form of social capital, or a hip new means of the corporate world’s weakening of organized labor and labor law protections?—Rick Cohen