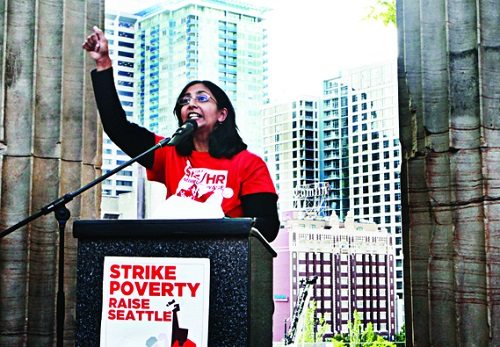 What if the Occupy movement had followed the path of the Tea Party to try to elect its own candidates to government? The Tea Party never became a political party, but a large number of candidates ran for local and statewide offices, with a huge effect on the composition of the House of Representatives in the 2010 electoral cycle, though running extreme, weak candidates who may have cost the Republicans control of the Senate (think Christine O’Donnell in Delaware, Sharron Angle in Nevada, and others). Nonetheless, support from Tea Party entities was consequential and still matters. Witness the ability of Senator Ted Cruz (R-TX) to wield support from Tea Party-sympathizing House members to shut down the government and push the federal government close to a debt default.

The Occupy movement largely eschewed electoral politics. In 2012, a number of candidates for Congress tried to pick up on the Occupy message, but it would be hard to think of them as Occupy candidates per se. Following the Tea Party model of challenging Republican incumbents, one Occupy activist named Nate KIeinman, who had been involved with Occupy Philadelphia, unsuccessfully challenged Rep. Allyson Schwartz (D-PA), though the more Kleinman mentioned Occupy in his statements that he wasn’t an official Occupy candidate, the more he seemed like he was wrapping his notoriety around the encampment at Dilworth Plaza.

Last week, the electorate of Seattle elected a legitimate, as in tangibly involved, Occupy activist to the Seattle City Council. Kshama Sawant, an economics professor at Seattle Central Community College, defeated a politically favored incumbent, making her distinctive as a candidate who really did work with the Occupy movement. She is also distinctive because she ran as a socialist, making her Seattle’s first elected socialist in a century. Among the priorities on her platform were raising the local minimum wage to $15, establishing rent control in high-rent Seattle, and enacting a tax on millionaires to fund public transit and other services.

“Even though we don’t believe in capitalism, we fight for reforms within the system because the experience of fighting for them raises the political consciousness of the working class and builds solidarity,” Sawant told Al Jazeera America of her political approach. “We cannot replace capitalism without learning the lessons by fighting for reforms—you don’t learn how to fight to change a capitalist society to a socialist one in school. You learn from the real experience of the struggle.”

When Dr. Scott Noren decided to challenge New York State Senator Kirsten Gillibrand, an Occupy Wall Street spokesperson named Patrick Bruner told the press, “Anyone can say that they’re working with Occupy Wall Street, but from what I understand OWS is against endorsing political candidates.” By abjuring engaging in the electoral process, and perhaps by rejecting the idea of an articulated set of policy demands, Occupy might have given up having influence comparable to that of the Tea Party. This may be because the Democratic incumbents that Occupy would have had to primary are not as distasteful to Occupy activists as the “Republicans in Name Only” (RINOs) were to Tea Partiers.

Our question for NPQ Newswire readers: Should the Occupy movement have emulated the Tea Party and run candidates to primary Democratic incumbents?—Rick Cohen