Somalia’s Artists Come out at Night 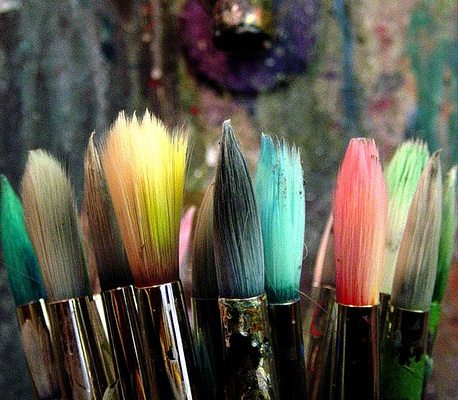 When the Center for Research and Dialogue, an NGO working in Somalia, came up with an initiative to commission artists to create posters with themes of peace, it found that many Somali artists were fearful for their lives and were thus wary about such a program. As Robyn Dixon writes in the Los Angeles Times, artists in Somalia’s capital of Mogadishu are “men [who] have lived their lives in a country with no tradition of artistic freedom or democracy.” However, as a militia tied to Al Qaeda has been driven from Mogadishu, a group of artists are now routinely planting their artwork around the city under the cover of night. Dixon reports that the artists’ targets are “the most dangerous people, like Somalia’s blood-sodden clan warlords and its ever-present Islamic militants, who still maintain a shadowy presence here.” From the article:

“The walls of their garage studio are decked out with giant canvases, ready to hang in the streets of the capital. One depicts a crowded city street with men on bicycles or pushing wheelbarrows, women in traditional Somali dress, buildings free of bullet holes and destruction, and a giant yellow sun like a beach ball. Its message is peace.

Another depicts a rural woman with a generous basket of fruit, a pretty red necklace and a wisp of hair straying idly from under her head scarf. There’s an undercurrent of socialist realism in its idyllic vision of rural womanhood and agricultural bounty. But the woman’s lush beauty would be enough to get an artist killed if it was displayed in an area controlled by the Shabab, the Al Qaeda-linked militia that until recently imposed a reign of terror on Mogadishu and still controls much of the country’s south. The Shabab believes women must be fully covered in billowing garments.”

The artists are currently engaged in training the next generation to take their place, mindful that their legacy is as much about building a lasting artistic community to carry their torch forward as it is about their own work. One young man who is an apprentice through this program with an older generation of artists is recovering from his own history of manning an armed checkpoint. He recalls the feeling of power it gave him to have been pressed into service in this way for what amounted to $2 a day and contrasts that with his current studies: “I feel great when I’m with them and they’re showing me what to do. We learn how they mix paint and how human beings’ faces are shaped. We’re improving and later we will be able to do what they do.”

Says one Mogadishu-based artist, “For art, you have to focus. Art teaches you about life. You’re drawing life, so you can’t just go and kill someone. If you want to be an artist, you have to learn to be gentle and wise.” Particularly for those involved with nonprofit arts organizations, Dixon’s full column is an excellent read as a profile of the courage and community that art can inspire. –Mike Keefe-Feldman