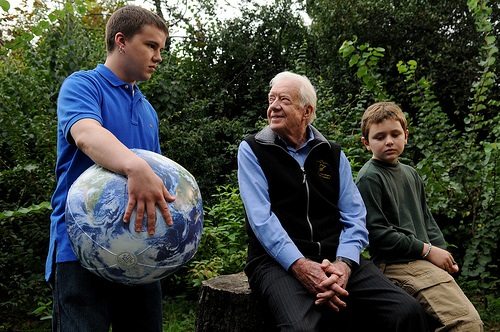 Our German is rusty, but Google translates Der Spiegel articles into passable English. Last week, Der Spiegel reported in an online article—in its German edition, not its English version—Jimmy Carter’s statements in Atlanta on the NSA “Spähskandal” concerning Edward Snowden. The former President described Snowden’s revelations as “useful,” U.S. policy on surveillance of American citizens as having “gone too far,” and the penchant for official secrecy “excessive.”

Carter went on to conclude that today’s United States lacks a “functioning democracy,” though he may have meant that as connected to his comments about the excessive role of money in American politics rather than Snowden’s revelations. Citing the restrictions on Americans’ civil rights, Carter concluded that the U.S. has suffered a severe decline in its moral authority around the world.

A couple of U.S. press outlets picked up on the Der Spiegel coverage, but only a couple of days later, and not significantly.

The issue of the content of Snowden’s revelations is still news in other countries, even if in the U.S., it seems to have devolved to a discussion of whether Vladimir Putin’s Russia will grant him political asylum and on what terms. Describing her continuing attempts to get the Obama White House to respond to a list of questions about U.S. spying in Europe, such as its monitoring of European heads of state and the European Union, Germany’s Chancellor Angela Merkel noted, following the Carter comments, “The end does not justify the means…Germany is not a surveillance state.”

The limited reaction to Carter’s comments is worth noting. He is one of four living former presidents and one of two with a strong post-presidential identity with a nonprofit. Unlike President Clinton’s Global Initiative and his personal foundation, Carter’s nonprofit is an operating nonprofit devoted to issues of democratic practice, with specific programs on democracy, human rights, and conflict resolution. It often takes on issues that major national and international organizations avoid, such as the Zimbabwean elections that octogenarian Robert Mugabe is guiding yet again (the Zimbabwean government denied the Carter Center the ability to monitor the elections) and the eradication of river blindness in Africa. The Carter Center even plans to send staff to Syria to explore the potential for a negotiated peace process.

Carter’s initiatives might not have the glamour of President Clinton’s philanthropic efforts, but they come with a lot of moral authority—the quality that Carter believes the U.S. is losing, bit by bit. Whether one agrees with Carter or not (for example, the Center’s proposed Syrian intervention is likely to provoke opposition from the Syrian rebels who want nothing less than Bashar Assad’s complete overthrow), it is impossible not to recognize and have respect for Carter’s dedication to principles of democracy. One would think that if either ex-President Bush or former President Clinton had lauded Snowden as having performed a public service by violating the law with his NSA revelations, it would have been big mainstream media news. Is it that Carter gets respect in Europe and across the world for his commitment to democracy, everywhere but the nation which he led from the White House? Is this an example of “a prophet not without honor, save in his own country”?—Rick Cohen