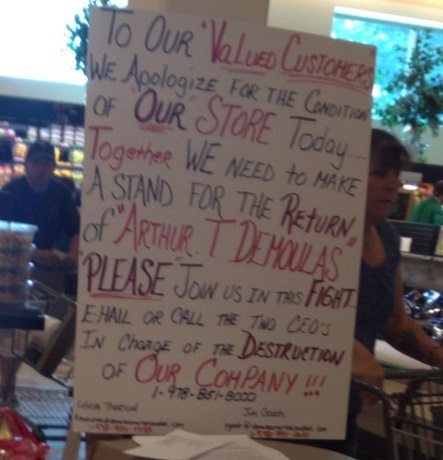 NPQ has repeatedly said that nonprofits do not necessarily have the corner on the socially-valued-institutions market. And in that vein, while many businesses have ugly scenes over ownership and control, few can boast a community response like the one seen in Massachusetts this past weekend.

I have written previously about the Market Basket grocery chain, which has 71 stores in Massachusetts, Maine, and New Hampshire. The employees and shoppers of the chain have a great deal of loyalty to the company’s leadership, and the scene has heated up considerably in the past month after the board of Market Basket voted to fire Arthur T. DeMoulas, the longtime and much beloved CEO. Arthur T. has for decades been in an epic struggle for control against Arthur S. Demoulas, a cousin.

Arthur T. is seen as a good and responsive boss and the business model, which invests heavily in staff and maintains low prices for customers, is very successful. Thus, thousands showed up last week at a rally to protest his ouster. Eight employees were fired. As one of those terminated was a warehouse supervisor with a 41-year tenure, others have walked out, leaving the warehouses virtually nonfunctional; many of the shelves in a number of stores are bare. More than 14,680 people have signed a petition asking Market Basket to reinstate Arthur T., and 29 politicians have pledged to support a boycott of Market Basket.

There can be no doubt that the operation is feeling the hit at every level. Two other executives were fired with Arthur T. last month and seven more resigned a day later. Customers are live-tweeting and Instagramming the condition of the stores. You can see some of them below:

The message is pretty clear at the Leominster #MarketBasket pic.twitter.com/RELBzbUgmr

Why would the employees care so much about the CEO? According to this report:

“[They] receive very strong benefits, including participation in a profit sharing program. They are worried that new leadership wants to operate the company in a way that stresses profits—Market Basket is already profitable, and does billions of dollars in revenue. This could, theoretically, threaten their livelihood. Employees also worry new leadership aims to sell the company; Thornton’s expertise historically has been in mergers and acquisitions. They say they are fighting for the preservation of the company. Moreover, they say it’s also about Demoulas himself, whom they hold in extremely high regard.”