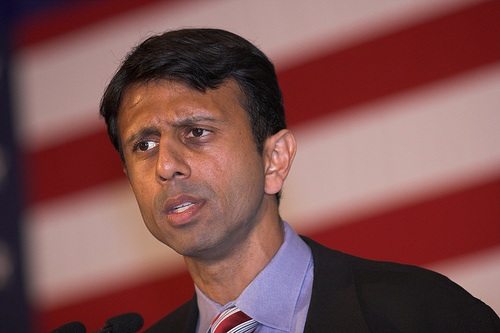 Remember Louisiana’s plan to use public dollars to send students to private schools? Governor Bobby Jindal, a prospective Republican presidential candidate, made it a linchpin of his educational program. Some of the schools that the program allowed students to attend included religious schools, occasionally possessed of unusual theories on issues of evolution. Jindal is unhappy right now because his own state’s supreme court ruled the voucher funding plan unconstitutional, in that it specifically diverts money away from public schools.

The program, currently serving some 4,700 students, was to expand to 8,000 this coming school year. A six-to-one vote by the state Supreme Court is kind of telling and leaves just about no room for an appeal to the federal courts. Jindal pledged to find the $40 million some other place in the state budget, but the court is clearly saying that if the state wants to fund private schools, it can’t do so by taking the money away from public schools.

This issue isn’t over. As the chair of the Republican Governors Association, and still nurturing aspirations for higher office, Jindal made school vouchers and overall school privatization a major tenet of his gubernatorial approach to education. Immediately after the decision, pro-voucher nonprofits like the Center for Education Reform and the Black Alliance for Educational Options declared their willingness to fight to save the program. The Center called the Louisiana program a civil rights issue, and BAEO described itself as heartened that the state Supreme Court only found the funding to be problematic, not the private school education alternative itself.

For the unions and existing public schools, the unconstitutionality of the Jindal program means that they might try to get back the MFP funding they lost to the private school vouchers. If Jindal wants to find some other state funding source to tap to pay for his program, he might have to also use those money to pay the public schools back for the MFP moneys they illegally lost to the voucher program.—Rick Cohen