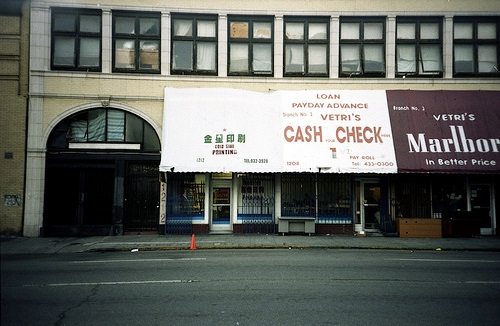 Max Ehrenfreund, a young blogger with the Washington Post, has compiled comments posted on a Reddit thread about how people survive in these United States while being poor, and the picture is amazing and distressing.

“The poor pay more for everything, from rolls of toilet paper to furniture. It’s not because they’re spendthrifts, either,” Ehrenfreund writes about the story painted by the Reddit posts. “If you’re denied a checking account, there’s no way for you to avoid paying a fee to cash a paycheck. If you need to buy a car to get to work, you’ll have to accept whatever higher interest rate you’re offered. If you don’t have a car, the bus fare might eat up the change you’d save shopping at a larger grocery store as opposed to the local corner store.”

According to one Reddit user, “When you are poor, the ‘system’ is set up to keep you that way.” Another wrote, “Growing up really poor means realizing in your twenties that Mommy was lying when she said she already ate.”

“I buy ‘fish’ antibiotics online because I can’t afford health care…amoxicillin and such,” yet another Reddit user wrote. “Mostly for husband who has Lyme’s disease. We can’t afford our monthly health care rates. We are 30somethings in the US. Really feel like a ‘bottom feeder.’”

Ehrenfreund references the “ghetto tax,” the economists’ concept of poor people having to pay higher costs associated with daily living. Examples include the expense of cashing checks, the higher rates of homeowner’s insurance in poor neighborhoods, higher costs associated with buying and insuring a car, the costs of installment plans for purchasing appliances, and more.

The many additional examples in Ehrenfreund’s article are simply heartwrenching. The quotes from the Reddit users sound like stories from the Great Depression, as though they were retold by James Agee and photographed by Walker Evans, but they are stories of today—in a society that purportedly has recovered from a recession, is making some people extraordinarily wealthy, and producing record stock market returns. Nonprofits know this narrative all too well, but the American public generally doesn’t. That makes Ehrenfreund’s article—and the entire Reddit thread—important reality reading.—Rick Cohen