Everyone has heard about the student debt crisis. More than 42 million people owe a total of $1.3 trillion in student debt. In California, the average debt for an individual graduating from a four-year institution is $21,382. Student debt isn’t new, but since government has invested less and less in education over the last 30 years while the cost of college has continued to go up faster than the cost of anything else in our society, the accumulation of student debt has progressively gotten worse. Scams, predatory loan practices, and college closures have compounded the problem.

Student debt hurts all of us

Parents who are still paying off student loans can’t save for their children’s future education. Young workers are stymied from saving for retirement, leading to economic troubles later in life.

If you’re not nodding your head because of your own experience with student debt, ask your friends or colleagues—it’s ubiquitous, but people tend not to talk about it without some coaxing.

Student debt is not just an issue for individuals, their families, and their life options. Student debt directly affects nonprofit organizations, too. 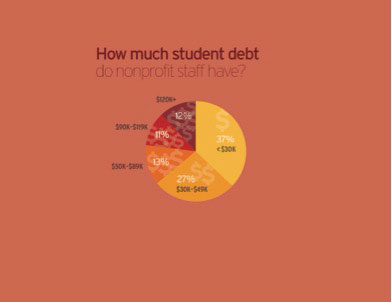 I entered law school fully intending to work in public service and I plan to do so. But that also means that I plan not to have children, not to own a home, and to save very little for retirement. That is a bummer, and I’m not sure it’s a plan I’ll stick with.

Student debt burdens can seem insurmountable, leading some to abandon nonprofit work. Student debt is a hindrance to recruiting employees who are diverse in racial, ethnic, and other qualities. For example, many nonprofits require bachelor’s degrees as a minimum education level for applicants, but very few have systems in place for supporting staff with debt. This disproportionately impacts people of color and people who are the first in their families to graduate college—groups that tend to graduate with more debt—and shrinks the pool of applicants for nonprofit jobs.

CalNonprofits has launched the Nonprofit Student Debt Project to combat the student debt crisis and its impact on nonprofits and the important work they do.

I work for the same nonprofit that helped me change my life while incarcerated. I love this work, but with a large student debt, no retirement, and having to pay for healthcare I’m wondering how I will ever be able to be present in this freedom I worked so hard for. 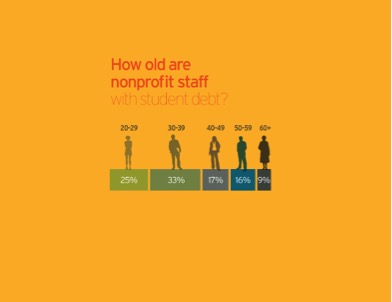 CalNonprofits conducted a survey this spring that drew a remarkable 953 respondents, of whom 792 also took the time to write individual comments and thoughts. Some key findings:

The survey also revealed the ways in which student debt hurts the nonprofit workforce. Student debt makes it harder for nonprofits to recruit talent, to retain talent, and crucially, to recruit and retain staff of color:

What is the Public Service Loan Forgiveness Program?

The Public Service Loan Forgiveness (PSLF) is a program of the U.S. Department of Education; it forgives the remaining balance of Federal Direct loans after 120 monthly payments (i.e., 10 years) are made through a qualified repayment plan (there are several) while employed by a qualified employer, typically a nonprofit or a government agency.

Individuals can work in any position at any 501(c)(3) nonprofit, but they must work full time (multiple part time positions at different nonprofits can add up to full time). They can be the CEO, a bookkeeper, a social worker, or a museum curator—any position.

The PSLF Program will begin accepting applications for loan forgiveness sometime in 2017, when the first borrowers will become eligible. Nonprofit staff with student debt should start now taking initial steps such as confirming eligibility, working with their nonprofit to complete the Employment Certification Form, and possibly consolidating loans. Later this month, you’ll see a follow-up article here at NonprofitQuarterly.org with more specific instructions and FAQs about how to apply.

What you can do

If you work at a nonprofit and have student debt:

If you are in management at a nonprofit or foundation:

If you recognize that student debt is hurting the nonprofit workforce:

The Nonprofit Student Debt Project of the California Association of Nonprofits—CalNonprofits—provides online information, webinars, and other resources for nonprofit employees with student debt as well as for nonprofit employers. Because the Public Service Loan Forgiveness Program is a national program, information is applicable not just in California, but across the United States. For more information, please contact Nonprofit Student Debt Project Manager, Christina Dragonetti.

Katie Kleinsasser is a Staff Writer at CalNonprofits.

More about: Management and Leadershipstudent debt