A new report produced by Imperative and Anna Tavis, an adjunct professor at the School of Professional Studies at NYU, says that “purpose-driven workers” are more valuable to employers than workers more motivated by other things. According to the study, only 28 percent of the population is purpose-driven, but—no surprise—nonprofits have more than their share of such folk.

Imperative is an organization founded by Aaron Hurst, author of The Purpose Economy and founder of the Taproot Foundation, so we are sure he has more than a little emotional skin in the game of seeing the purpose-driven as more valuable, but the study finds that purpose-driven employees have 20 percent longer expected tenures, are 47 percent more likely to act as ambassadors for the organization, and are 64 percent more likely to be fulfilled in their work.

The report also asserts that these employees do not just seek out purpose in their work but they create it, which may have something to do with why they are 50 percent more likely to be in leadership.

Nonprofits, as we said, have a disproportionate potion of these kinds of workers at somewhere around 46 percent, second only to the 48 percent of educational employees. (These numbers are based on answers to a 36-question online survey given to 6,332 adults in the United States.) 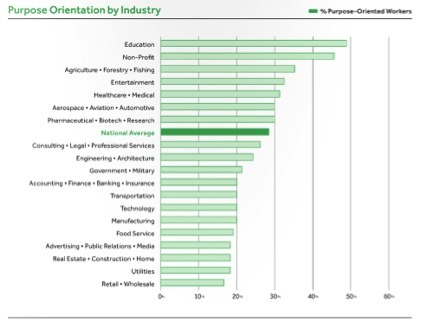 But though we are sure there are ways to make best use of your outsized treasure trove of purpose-motivated employees, the report states that purpose motivation is more of a trait than a state, which means that it is something we have to look for at the point of hiring. Joyously purpose-oriented workplaces may do a better job of hiring such folk, but may not be able to instill purpose where none exists.

These findings are connected to others that differentiate intrinsically and extrinsically motivated workers and urge managers to understand that these differences in motivation require an augmentation in management style. However, other research suggests that there is more nuance in worker motivation and that a more mixed approach should be taken.

We would love to hear from readers who have researched or used these theories to help their workforce achieve their best.—Ruth McCambridge