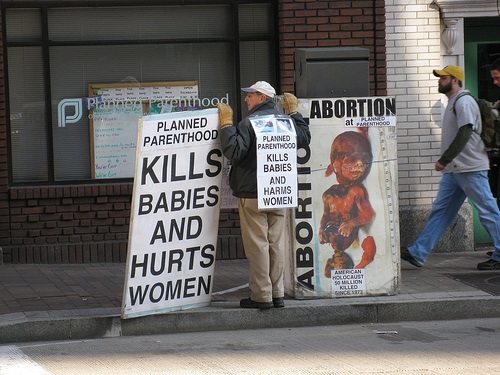 NPQ has been covering the ripples from this summer’s Supreme Court decision striking down Boston’s 35-foot buffer zone around abortion clinics. A number of localities that had buffer zones have voluntarily eliminated them before they were challenged, but now five pro-life activists in Western Pennsylvania have come forward and filed a lawsuit protesting the 15-foot buffer zone Pittsburgh instituted in 2005.

Pittsburgh enacted the ordinance in order to prevent individuals from protesting, picketing, or demonstrating within the specified 15-foot distance from the entrance of any hospital or healthcare facility, such as an abortion clinic. The ordinance also mandates that protestors remain eight feet away from individuals walking into clinics—in this lawsuit, a Planned Parenthood.

The plaintiffs named in the suit, Nikki Bruni, Julie Cosentino, Cynthia Rinaldi, Kathleen Laslow, and Patrick Malley, have cited several concerns with the use of the protective barrier, most notably the impingement of their freedom of speech.

According to the lawsuit, these buffer zones create “anti-speech zones on the entrances to an enormous number of facilities throughout Pittsburgh that provide any health care services.”

In the suit, the plaintiffs indicate that it is not that their speech has restricted demonstrating, but rather it prevents them from speaking and conversing with women entering the health facility. According to the lawsuit, the five plaintiffs regularly stand outside the Planned Parenthood on Liberty Ave in downtown Pittsburgh and try to peacefully discuss options other than abortion with individuals walking into the clinic.

“It’s not a matter of demonstrating as much as communicating,” said the plaintiffs’ attorney, Lawrence G. Paladin, Jr. “That is the desire—to be able to speak to people.”

The suit indicates, “Plaintiffs seek to have quiet conversations and offer assistance and information to abortion-minded women by providing them pamphlets describing local pregnancy resources, praying and to peacefully express this message of caring support to those entering, and existing the clinic.”

The crucial difference between the Massachusetts’ buffer zone case and this current lawsuit against Pittsburgh is the actual distance of the buffer zone. While buffer zones in Massachusetts were required to be 35 feet away from a health facility, Pittsburgh’s zones are less than half that length, with a 15-foot radius. In McCullen’s case, lawyers argued the 35-foot distance prevented such counseling from taking place. Evidently, the lawsuit against the City of Pittsburgh is taking a similar route. Whether a 15-foot radius would practically prohibit counseling and speaking directly with individuals may also be a crucial factor in the decision.—Shafaq Hasan