Suppression of Dissent in Russia Resurges Once Olympics Ends 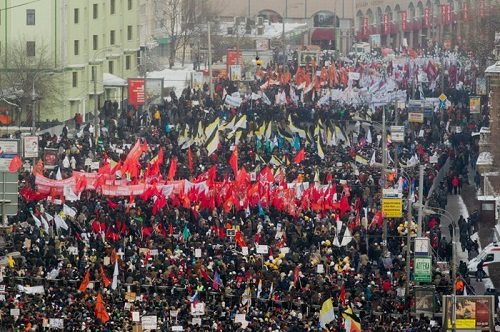 In the run-up to the Sochi Olympics, Russia, suffering from the scrutiny of the world where human rights and civil freedoms were concerned, released a number of dissidents from prison only to sentence a new grouping of dissidents within hours after closing ceremonies were concluded. All were sentenced to two to four years for their participation in a May 2012 rally protesting President Vladimir Putin’s inauguration.

“Why did they sentence him?” asked Stella Anton, the mother of a man sentenced to three and a half years. “To frighten people, so that they won’t go to demonstrations, so that they won’t protest, to put them on their knees and so they’ll put up with everything that’s happening in the country.”

And just in case the message was not heard, on Monday, when people gathered as close as barricades would let them get to the court for a peaceful protest of that trial and verdict, OMON, Russia’s special riot police, broke the rally up, and at least 232 protestors were herded into buses and detained. Calls went out over social media to reconvene that evening, and police again were ready, detaining an additional 426 people.

This op-ed in the Wall Street Journal by Vladimir V. Kara-Murza speculates that “the intentionally harsh sentences for the Bolotnaya Square prisoners, and the arrests of those who raised their voices on their behalf, are meant to serve as a warning and to prevent the reemergence of street protests.—Ruth McCambridge