Supreme Court Hears Argument For and Against Public Sector Unions 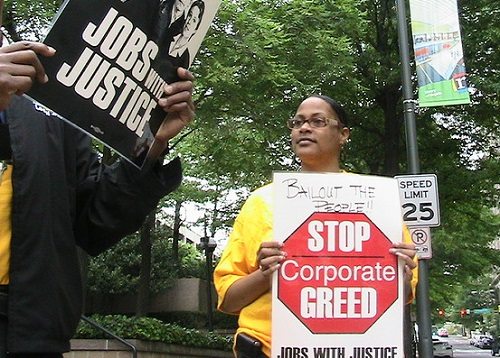 Earlier this year, the NPQ Newswire noted a possible trend among conservative governors and conservative foundations to attack public sector unions. The attack on public unions seems to be paying dividends for conservatives. Reversing a trend in recent years, union membership last year increased in the private sector with 282,000 new union members, but declined in the public sector, where unions lost 118,000 members.

Some of that public union decline might be due to the combined impacts of budget cuts, sequestration, and the brief partial shutdown of the federal government, but the public sector union membership shrinkage might also reflect the successful efforts of Wisconsin governor Scott Walker to make union membership less attractive for government employees by sharply restricting unions’ collective bargaining rights.

A case in front of the U.S. Supreme Court may be the next step in weakening the effectiveness and attractiveness of unions representing public sector employees. The case is Harris v. Quinn, stemming from a decision of former Illinois governor Rod Blagojevich, a Democrat, to classify home healthcare providers hired by persons with disabilities (and subsidized by two Medicaid programs) as government employees and therefore eligible to be organized by unions. Can state government be required to collect compulsory union membership fees on behalf of the union representing the home healthcare workers—in this case, the Service Employees International Union (SEIU)?

The case is fundamentally a right-to-work case. William L. Messenger, an attorney for the National Right to Work Legal Defense Foundation, argues, according to Robert Barnes of the Washington Post, that “forcing public employees to support a union with which they might disagree violates their constitutional rights of association and free speech” and is therefore a violation of the First Amendment. “Our position is that in the public sector when government is involved, compulsory fees are illegal under the First Amendment,” Messenger said.

The union position is that they actually represent all of the employees, whether they join the union as active members or not, and therefore should be able to have the state collect mandatory membership fees. At a minimum, Messenger challenges whether the home healthcare workers should be considered state employees at all. Beyond that, he questions whether the state’s mandatory collection of fees means that it is compelling the home healthcare workers to support the union, regardless of their personal opinions. (Under a 1977 decision, the state can collect fees for the union’s representation of the employees, but not fees that would pay for the unions’ political activities.)

Fundamentally, this is the classic “free rider” issue. All government employees benefit from the collective bargaining carried out by their public sector unions. If they were permitted to avoid paying union membership fees, they would be “free riders” benefitting from, but not contributing to, the cost of the unions’ collective bargaining services.

In a narrower frame, is it really possible to separate a union’s collective bargaining functions from its political engagement functions? The unions might argue that the rationale for their separation is artificial and impractical. During oral arguments, on the other hand, Justice Antonin Scalia questioned whether there is a state interest in “closed shops” that require employees to recognize designated unions as their exclusive agents, and Justice Samuel Alito noted that then-Governor Blagojevich received a large campaign contribution from the SEIU when he made the home care workers state employees.

Other states will be watching the Supreme Court on Harris. There is reportedly a similar case in the works in Minnesota. In Pennsylvania, supported by a free market think tank called the Commonwealth Foundation, legislation has been introduced in the state’s House and Senate to undo mandatory state government collection of public sector union fees. If the Supreme Court rules against the unions and frees the state government from mandating and collecting membership fees on the parts of the unions, it could change an important dynamic. Not only would public union membership decline if government employees were permitted to opt out, the unions would have to refocus their attention to signing up members and collecting members’ dues and fees without the intercession of the state’s paycheck deduction.