Taser Use During Foreclosure Demo at DOJ Raises Questions 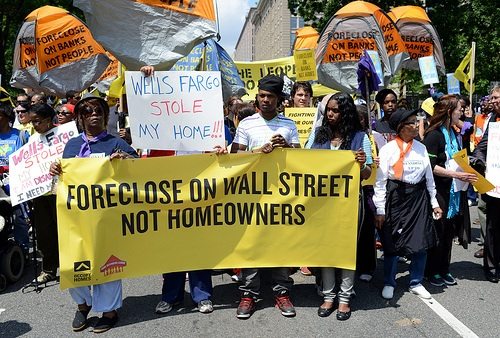 A coalition of housing advocacy groups, including the Home Defenders League and Occupy Our Homes, protested at the Department of Justice last week, calling for Attorney General Eric Holder to prosecute the bankers that caused the foreclosure crisis. (See Matt Taibbi’s “Gangster Bankers: Too Big To Jail” for more on this issue.) The protest involved 400 homeowners, many of them black and Latino, and 100 supporters. When officers moved to arrest them, several applied tasers despite the absence of violent resistance to arrest. There is video of one of these incidents involving Carmen Pittman, an activist with Occupy Our Homes in Atlanta.

The use of tasers in situations where someone nonviolently resists a police command is disallowed in most police departments, according to a study by the National Institute of Justice. NYU law professor Sarah Knuckey, who co-authored a report on the suppression of the rights of Occupy activists, comments, “The incident needs to be thoroughly investigated, there must be a public accounting of what happened and why, and any wrong-doing must be punished.”

Last week, the DOJ was also under fire for seizing phone records of journalists and investigating reporter James Rosen of Fox News. Does the Department of Justice have a problem with free speech?—Ruth McCambridge