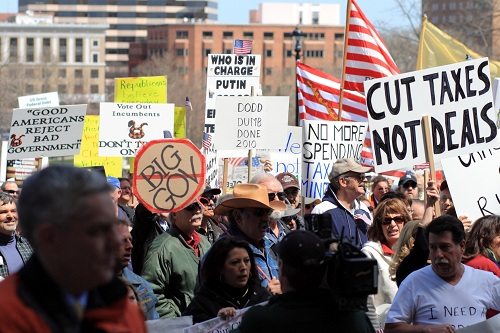 Very carefully, a number of 501(c)(3) nonprofits are listed as sponsors of “the educational portion of the Value Voters Summit,” distinguishing their participation from “sponsoring the appearance of any candidate for public office or political party” or indicating that “they support, oppose or endorse any candidate for elective public office.” The 501(c)(3) public charities involved in this annual convocation included the Heritage Foundation, the Media Research Center, the Family Research Council, and Liberty Counsel, though many of these (c)(3)s were joined by their 501(c)(4) doppelgangers, such as FRC Action and Liberty Counsel Action.

Conservative pundits like Charles Krauthammer have reviled Sen. Ted Cruz (R-TX) for his strategy to lead the federal government into a partial shutdown. Nonetheless, Cruz was warmly received at the Summit and won its straw vote for future presidential candidates with 42 percent of the assemblage. It’s certainly early for the 2016 presidential campaign, but does this make Cruz the leading candidate among Republican contenders, or the leading candidate of the Tea Party?

In recent political history, the Tea Party has been an undeniably distinctive movement. Originally, it was not quite so allied with religious conservatives. It was more libertarian, and articulated a vision of a sort of economic populism. (The populist dimension of the Tea Party critique actually stems from its origins in CNBC reporter Rick Santelli’s call in 2009 for a “Chicago Tea Party.” Oddly, Santelli was protesting President Obama’s mortgage foreclosure relief plan, which many took as a criticism of bailing out the banks, but Santelli and others actually seemed to be opposing the idea of bailing out homeowners in default.)

However, it would seem that if the Tea Party was ever a grassroots political movement—and many people seriously doubt that it was—it has drifted far from that today. For example, Cruz, along with Tea Party favorites Mike Lee (R-UT) and Rand Paul (R-KY), are co-sponsors of pending legislation to repeal the Dodd-Frank Wall Street Reform and Consumer Protection Act that regulates the big banks. Dodd-Frank’s most significant piece is a consumer protection board, which one would think would appeal to the original Tea Partiers, being concerned about predatory financial institutions. Their plan would replace it with nothing at all. If the Tea Party wasn’t in the hands of Wall Street from the very beginning, it might be considered an automatic ally of corporate America now for opposing government regulation of the corporate sector, even if, at times, corporations don’t want its help (as, for example, in the government shutdown, which major corporations view with trepidation, especially if it leads to a potentially catastrophic U.S. government debt default).

If there was a populist sentiment to the Tea Party, that is just about nowhere to be seen in Cruz’s stance against the Affordable Care Act. What is Cruz’s opposition to the guarantee of national healthcare insurance? “The administration’s plan,” Cruz says, “is to get as many Americans as possible addicted to the sugar, addicted to the subsidies.” The reality, of course is that the Affordable Care Act opens up a tiny percentage of the uninsured for subsidies, but eliminates the anti-populist insurance company positions on pre-existing conditions, makes health insurance much more available to individual purchasers, and provides mechanisms for ordinary Americans to understand and compare different insurance options. But the Tea Partiers stand in opposition to making health insurance more available and more affordable to ordinary Americans.

At the Value Voters Summit, Mike Lee explained his fight to block the implementation of the Affordable Care Act by charging that in his program for national health insurance, “The president is using the vast power of the American government to hurt the American people.” Cruz referred to the program as a “trainwreck” and a “nightmare.” Dr. Ben Carson took the stage at the Summit to declare national health insurance as “the worst thing that has happened in this nation since slavery,” explaining that “it aims to make all of us subservient to government” through a Leninist policy of “socialized medicine”, even though the ACA depends on private insurers and private healthcare providers.

If there were ever a populist dimension to the Tea Party movement, it is missing under the leadership of Value Voters Summit straw poll winner Ted Cruz.—Rick Cohen