Teach for America at 25 and the Movement to Privatize Schools 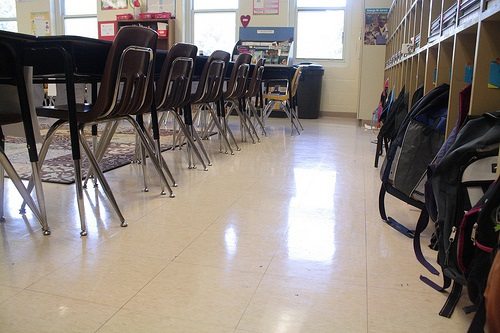 This week, NPR ran an in-depth piece about Teach for America at age 25. According to the NPR reporters (Eric Westervelt on the radio, Anya Kamenetz online), it was 25 years ago that Princetonian Wendy Kopp “made [her] masterstroke.” Her idea was to make public school teaching “an illustrious two-year postgraduate service mission rather than a safe middle-class career choice—more Peace Corps than post office.” Today, TFA counts 37,000 alumni and 10,500 members currently in the field; it’s also a top recruiter of high quality college grads.

The NPR report notes TFA’s endorsements by Presidents Bush I and Bush II, Clinton, and Obama; huge grants from philanthropies such as the Walton Family Foundation and the Bill & Melinda Gates Foundation; and powerful alumni that include Students First’s Michelle Rhee, District of Columbia schools chancellor Kaya Henderson, and Newark schools director Cami Anderson. As a result of TFA’s ability to place teachers into schools with only five weeks of training, NPR notes that TFA has “helped open the doors to alternative-certification programs for teachers…[so that] today 1 in 5 new teachers is certified by a path other than a bachelor’s degree or master’s in education.”

The story focuses on a number of areas where Teach for America is trying to change in response to criticisms: increasing the racial diversity of the TFA membership, considering training that goes longer than five weeks, and encouraging TFA teachers to stay in the profession for more than two years. But if we leave aside the debate over the quality of TFA’s training and teachers, the biggest issue now is TFA’s impact on public schools and its ideological, even political, agenda. TFA has become an increasingly powerful and visible cog in the education reform movement machine, which promotes the privatization of public education through the building and staffing of alternatives like charter schools, replacing public school teachers, and finding leadership positions for TFA alums, where they can push for privatization.

TFA co-CEO Matt Kramer dismisses claims, some from within the ranks of TFA alums, that TFA “acts to the detriment of public education” with the comment that these criticisms have been “blown out of proportion” and are “not representative” of the thinking of most TFA alumni. In response to charges that TFA is part of the education reform movement, which promotes market-based alternatives to public schools, Kramer responds, “We’re a leadership organization, not a political organization. […] We have no ideological positions on issues.”

But the reality is that of TFA members who are still active as teachers, 40 percent are in charter schools. While TFA says it does not displace teachers in public schools, the fact that many are teaching in charters amounts to roughly the same thing, as increasing numbers of charters are opening in districts where public school teachers are being laid off as a consequence. (For example, New Orleans fired a total of 7,500 teachers and other school employees after it closed public schools following Hurricane Katrina and reopened them as charter schools.) An alum of TFA herself, Beth Sondel of the University of Wisconsin at Madison also notes that half of the nation’s largest charter school networks have TFA ties of one sort or another.

Kramer may be reaching for modesty when he downplays the ideological agenda of TFA. The number of TFA alums who are now school principals or hold other public and private sector leadership positions of influence is quite large. To the extent that they believe, as Sondel suggests TFA believes, “that public schools are irreparably damaged, [that] bad teachers and bureaucracy are to blame, and our only salvation is by diminishing the union, innovating and creating systems of choice and competition,” TFA does have an ideology, one that appears ensconced in the education reform movement of public school privatization.—Rick Cohen