Teach for America: Down in Minnesota, but up in Wisconsin 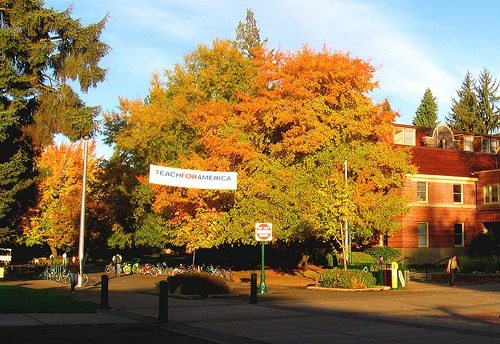 Minnesota’s Democratic Governor Mark Dayton nixed a $1.5 million state earmark for Teach for America in the Gopher State’s budget, but all is not lost for TFA in other states. In nearby Wisconsin, Republican Governor Scott Walker has proposed $1 million for TFA in his biennial budget.

TFA has its critics and its supporters. Among the critics is Diane Ravitch, an education expert, who writes, “Teach for America is a wealthy organization that sends ill-trained recruits to teach in under-resourced districts…These poorly trained young people, with no experience as teachers and no commitment to stay beyond two years, are expected to work wonders. They don’t.”

There are also plenty who think that public schools—and traditional, unionized public school teachers—don’t do a good enough job, and that well-motivated young college graduates from the nation’s top schools armed with five weeks’ worth of training under TFA’s tutelage would do just as well, if not better. That may be the reason why the politically conservative Walton Family Foundation announced in 2011 a $49.5 million grant for TFA.

While there do seem to be the beginnings of a pushback against TFA, centered in Governor Dayton’s veto of the TFA earmark along with Minnesota’s rejection of TFA’s request for a blanket waiver of teacher certifications for its teachers, TFA has reservoirs of support to tap in other state and local government quarters:

While defenders of TFA decry the power of the teachers’ unions to purportedly deny TFA Minnesota budget moneys, elsewhere in the U.S., TFA is doing quite well with a combination of government funds and philanthropic capital. Have any other states joined Minnesota in actually rejecting TFA for grant funding and certification waivers, especially after having typically given TFA that kind of support in years past, as Minnesota did?—Rick Cohen