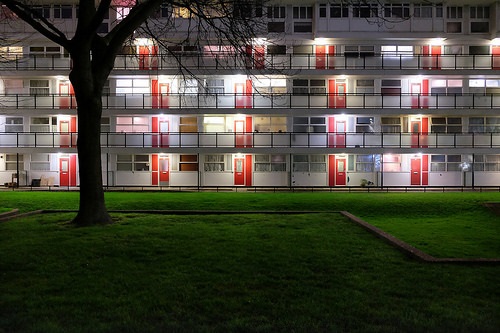 If you think the trend of both liberals and conservatives toward a steady reduction in government funding of social services—or a steady trend of making the poor pay more for the services they get—is simply an American phenomenon, you’re mistaken. In the UK, Tom Murtha, the chair of the Housing Associations Charitable Trust, writes, “We are witnessing the slow death of social housing. The number of social homes is being gradually eroded by the right-to-buy scheme, the conversion of social rent to so-called affordable rent and the lack of replacements.”

Social housing is the term used in the UK for housing that is owned and managed by local government authorities (like public housing here in the U.S.) and nonprofits, with rents set to accommodate the poor, and units “distributed according to the local council’s allocation scheme” as opposed to “tenancies [that] are offered by the landlord and letting agent to whomever they choose.”

Murtha distinguishes between “social rents” and “affordable rents,” the latter set at 80 percent. He writes that some social housing providers are converting their social rent units, usually very low cost, to the much more expensive “affordable” level. More than 11,000 units, he says, were converted from social to affordable rent levels in the past 12 months.

The pressure to move from social to affordable rent levels, the housing providers claim, is due to reduced investment from government. By moving toward more affordable units and less social units, the providers say they are able to survive and simultaneously produce more housing, even if the units are made available at rents much higher than standing social rents. Although government seems to be happy with the increasing rent levels among social housing providers, Murtha questions whether that constitutes success:

“Housing association have collaborated in a programme that has increased rents in some areas to levels that many ordinary working people can no longer afford. This is not my definition of success.”

“The real casualties of this move to increase rents to levels that are unaffordable to many, are poor people and those receiving benefits,” Murtha writes. “The converted rents and the rents of new homes are often too expensive for those who in the past have found refuge in social housing.”

He questions whether the charitable status of housing associations is being maintained when then are pushing people who can’t afford higher rents into, for them, unaffordable housing situations. “One of the [charitable] conditions of those early funds was a duty to help those in desperate need,” Murtha points out, “Boards and executives should be testing their policies to see if they are still doing this. In my view, boards are failing in their duty as stewards and custodians if they don’t.”

Murtha’s challenge to the UK’s social housing providers has a rarely stated parallel here. To the extent that nonprofit housing developers and managers in the U.S. ratchet up their rent levels per the opportunity provided by government affordable and subsidized housing regulations, are they drifting away from their original purposes of housing the poor in favor of an overarching purpose, simply keeping the organizations alive through the production and management of continually less affordable but more profitable housing?—Rick Cohen