The Art in the Timing of Sepp Blatter’s Resignation 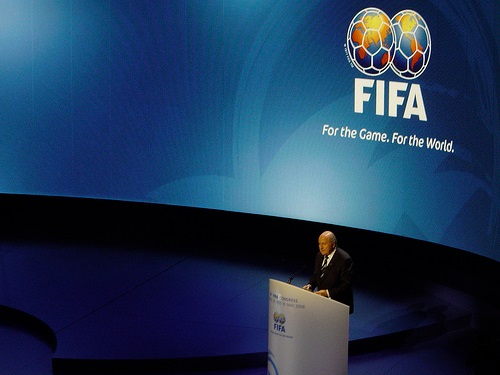 When the word came down that Sepp Blatter had resigned as president of FIFA, the global governing body of the sport of soccer, after just having been reelected to a fifth term, one phrase came to mind—from sports, mind you: In Your Face!

FIFA has been in extraordinary trouble during Blatter’s entire 17 years as president—and remember, before being elected president in 1998, he was general secretary of FIFA, the number two guy in the bureaucratic hierarchy, starting in 1981. In the wake of his fist-pumping election celebration, Blatter announced his intent to resign contingent on the FIFA executive committee organizing a process for a new election, because, he says, that the reforms that he was trying to implement weren’t enough and the organization “needs a profound overhaul.”

Think of it this way. Had Blatter acceded to demands that he not stand for election, it would have looked like he was involved in or responsible for the criminality documented in the Department of Justice arrests of his closest allies in the organization. By getting re-elected (which included getting his only credible opponent, a Jordanian prince, to drop out of the running), Blatter is able to say—perhaps to himself and his allies, if not to the general public—that the FIFA membership heard all of the charges and still reelected him president, meaning they didn’t buy the insinuations he might have been responsible for any of the financial chicanery. Now, with the FIFA electorate’s clean bill of health, he can even position himself as a proponent for cleaning house.

Blatter said as much in his resignation speech, that he was above the fray, but FIFA was in trouble as an institution:

“I cherish FIFA more than anything and I want to do only what is best for FIFA and for football. I felt compelled to stand for reelection, as I believed that this was the best thing for the organization. That election is over but FIFA’s challenges are not. FIFA needs a profound overhaul. While I have a mandate from the membership of FIFA, I do not feel that I have a mandate from the entire world of football—the fans, the players, the clubs, the people who live, breathe and love football as much as we all do at FIFA.”

Interestingly, Blatter said he had been blocked over the years in making the “deep-rooted structural change” he felt FIFA needed, but the examples he chose were all administrative: reducing the size of the FIFA executive committee, electing the members of the Executive Committee by the FIFA congress, term limits for the FIFA president and the executive committee, and organizing “integrity checks” through FIFA rather than through the member football confederations. Given the outright bribery and thievery that has been the calling card of some FIFA bigwigs, the Blatter reforms seem beyond innocuous. If the FIFA organizational culture is as rotten as it appears, Blatter’s reforms would be, at best, changes on the margins that wouldn’t undo the core FIFA problems.

FIFA’s culture seems to have been suffering from ethical sepsis for the entirety of Blatter’s reign and even before, when he was the top lieutenant for João Havelange. A few of the incidents less well known to U.S. nonprofit readers make the charges of bribery and favors alleged by the U.S. Department of Justice understandable as part of a FIFA pattern of active and passive participation in corruption:

Before announcing his resignation, Blatter had said he wouldn’t resign. “Why would I step down?” he said. “That would mean I recognize that I did wrong.” Then he did resign, but after increasing pressure from a variety of people linked to FIFA, among Blatter’s opposition, who found themselves to be fed up. But perhaps the most telling comment came from Jack Warner, the Trinidadian soccer official who has been charged with stealing several million dollars and whose two sons are cooperating with investigators. A longtime but perhaps now former ally of Blatter, Warner said from Trinidad, “If I have been thieving FIFA money for 30 years, who gave me the money? How come he is not charged?” Maybe that is why Blatter is so reluctant to step foot in the U.S., and perhaps why Blatter is considering alternative work and living accommodations.

The Nation’s Dave Zirin summed up the FIFA scandals and Blatter’s leadership succinctly for Amy Goodman at Democracy Now!, who asked if he had been surprised by the FIFA scandal:

“Not surprised at all, about as surprised as I’d be if I fell in a pool and emerged wet. The only thing that is surprising here is that we’re now dealing with charges that have actual teeth. That’s the only surprise. I mean, we are talking about the Enron of sports and a hubris and arrogance that is bringing down a multibillion-dollar corporation. The only difference between FIFA and Enron is that FIFA has been designated a nonprofit by the Swiss government, which makes looking at its books and finding the extent of the corruption all the more difficult.”