The Clinton Foundation, FIFA, & Qatar’s Hosting of the 2022 World Cup 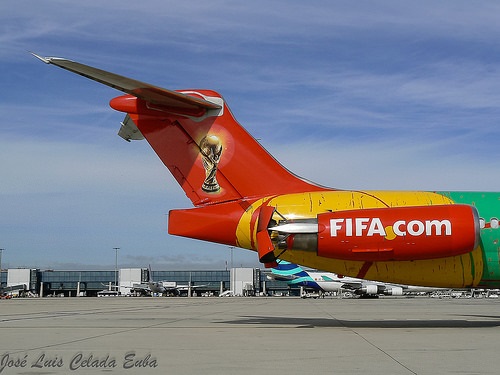 “The sheer breadth and power of the [Clinton] foundation donor base ensures that virtually any financial or legal scandal that touches major world institutions in coming years has a good chance of involving a foundation contributor, a potentially continuing headache for Hillary Rodham Clinton as she runs for president.”

That is the conclusion of the Washington Post in light of the revelations that among the Clinton Foundation’s 200,000 donors was the Fédération Internationale de Football Association—FIFA—whose leadership was largely carted away by police in Switzerland due to charges announced by the U.S. Department of Justice. Also among the donors was the Qatar 2022 Supreme Committee, the organization established to build the stadiums and other facilities for Qatar’s hosting of the 2022 World Cup in soccer.

The coverage of FIFA’s serial scandals up to and including the Justice Department actions this week clearly implicates money flowing through various Qatari operatives to members of the FIFA board to secure their votes for a World Cup which will be played in a nation whose climate is a desert. (The dates for the Cup have been moved so it can be played between November and January, rather than the oppressively hot May to September summer, although that may lead to other problems.)

In addition to the U.S. actions against members of FIFA’s leadership, the Swiss government has launched a specific inquiry into the process that led to the Qatari World Cup decision. FIFA may have had fourteen officials arrested, but the association quickly announced that it has no intention of re-voting the decisions to have the World Cup played in Russia in 2018 or Qatar in 2022.

FIFA reportedly gave the Clinton Foundation between $50,000 and $100,000 as a membership fee to participate in the Clinton Global Initiative, plus a commitment to build 20 community centers in South Africa as part of FIFA’s decision to put the 2010 World Cup there, and the Qatar committee gave between $250,000 and $500,000 as a CGI sponsor in 2013. The Qatar 2022 Supreme Committee might not have been entirely advocating for the World Cup as an independent voluntary organization, as the government of Qatar was doing whatever it could, with lots of money flowing, to get the FIFA World Cup nod. The government of Qatar has given between $1 million and $5 million to the Clinton Foundation.

The Clinton Foundation has received donations from a number of sketchy donors, apparently operating under the belief that the questionable probity of the donors (and their potential business with the U.S. State Department during Hillary Clinton’s tenure there) didn’t undermine the positive things that the Foundation could do with the money or get CGI sponsors to do on their own.

It might have been a good turn for the Clinton Foundation to consider what the Qatar government does—or doesn’t do—to protect the workers, largely foreign, who will be building the infrastructure and facilities for the World Cup. City Lab estimates that 1,200 migrant workers have already died in conjunction with World Cup construction activities in Qatar since 2010. It also mentioned that Qatar (along with Saudi Arabia and other Gulf countries) refused to grant bereavement leave to the tens of thousands of Nepalese laborers working in the country so that they could attend the funerals of neighbors and family who might have died in Nepal’s April 2015 earthquake.

In the wake of the announcement of its hosting the World Cup, Qatar came under international pressure to make progress on nine areas of mistreatment of migrant workers, who were going to be the people building the World Cup venues. According to a recent report from Amnesty International, Qatar has made absolutely no progress on four areas of labor rights:

“The lack of a clear roadmap of targets and benchmarks for reform leaves serious doubts about Qatar’s commitment to tackling migrant labor abuse. Without prompt action, the pledges Qatar made last year are at serious risk of being dismissed as a mere public relations stunt to ensure the Gulf state can cling on to the 2022 World Cup.”

It’s not like FIFA didn’t know this. Qatar’s track record on labor rights for its foreign workers (only 10 percent of the nation’s population is Qatari) has long been known to be staggeringly horrendous, documented in detail in several reports, including Human Rights Watch’s World Report 2014. The Clinton Foundation had to have known as well.

The Guardian has done consistent work on Qatari labor conditions, reporting most recently on Qatar’s arrest of a BBC news crew that was looking into improvement of labor conditions there. FIFA laughingly announced that it would investigate the arrest of the BBC news team, only a little over a week before the arrests of some of its senior brass.

There’s no point in asking a corrupt body like FIFA to explain its choice of Qatar given the country’s appalling labor record. But there is a point in asking the Clinton Foundation. Simply saying that it is large and multifaceted, leading to relationships with lots of questionable donors, doesn’t do the trick. Among nonprofits of all sizes, there is the practice of gift acceptance guidelines that explain the kinds of donors that nonprofits will and will not solicit and the donations they will accept or reject, based on explicit criteria, sometimes including governance practices and treatment of labor. Given the many press reports over the years regarding allegations of Qatari bribes and favors to FIFA board members, the Clinton Foundation knew what was going on in and around Qatar’s World Cup desires. Populated by smart, experienced political and philanthropic operatives, the Clinton Foundation also knew that migrant workers are treated like modern-day indentured servants under Qatar’s kafala system. At some point, it is worthwhile for the Clinton Foundation to just say “no” to some kinds of donors, no matter how much good the foundation might be able to do with their donations. The alternative sullies the reputations of other donors and the foundation as well.—Rick Cohen