The FBI, Occupy and Terrorist Imaginings 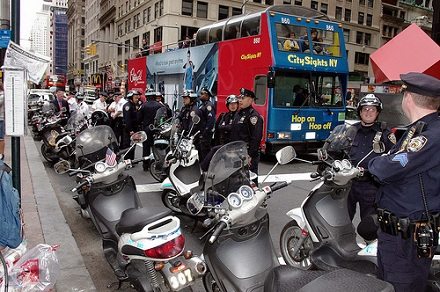 Michael S. Schmidt and Colin Moynihan report that the Federal Bureau of Investigation monitored and reported on the Occupy Wall Street movement from the very beginning of the Zuccotti Park encampment, actually even before the encampment started. From that point on, FBI agents kept a close eye on Occupy activities around the country and shared the information with businesses and universities. American Banker says that the New York Stock Exchange, Zions Bank, and the Federal Reserve Bank of Richmond were among the recipients of FBI reports.

The FBI effort wasn’t just monitoring. The name of the FBI initiative was titled, “Domain Program Management Domestic Terrorist.” In other words, this was a counterterrorism effort, the Occupiers potential domestic terrorists. Who would have ever thunk it? It seems to put the lie to the right wing trope that the Occupy movement was doing the Obama Administration’s bidding. Maybe they thought the tent encampments were a threat to domestic security.

According to the Times, “The F.B.I. was concerned that the movement would provide ‘an outlet for a lone offender exploiting the movement for reasons associated with general government dissatisfaction.’” One of the FBI memoranda described the Occupy march on September 17, 2011 as “the planned Anarchist protest.”

Mara Verheyden-Hilliard, the executive director of the Partnership for Civil Justice Fund, contends that the FBI investigation was improper because it was gathering information on American citizens involved in lawful activities, basically exercising their constitutionally protected freedom of speech. The Fund actually obtained and released the FBI documents. Reading the original FBI documents reveals how wide ranging the FBI’s concerns were about these homegrown domestic “terrorists”, working with officials at the State University of New York at Oswego, the HAZMAT teams of Birmingham, Alabama, and, most intriguingly, several banks in Biloxi, Mississippi concerned about the “National Bad Bank Sit-In Day”.

Don’t you feel safer now that the FBI was on the case of Occupy? But doesn’t it make you think, if you’re a direct action advocacy group, that the FBI might have been keeping a close eye on your organized picket or protest or march—even though your group was only exercising its free speech rights?—Rick Cohen