The FBI’s “Visits” to Tar Sands and Keystone XL Activists 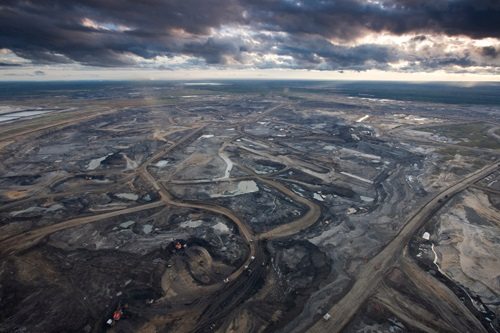 The Federal Bureau of Investigation (FBI) has many important things to do, such as busting Russian spy rings, tracking ISIS’s recruitment of young Americans, and exposing white collar corruption such as corporations’ bribing foreign officials.

The latest FBI activity, apparently sparsely reported in the mainstream press, has been its contact and visits with U.S. activists protesting against the Keystone Pipeline—or, more broadly, against extracting oil from tar sands in Canada. Alexander Panetta for the Canadian Press reported last week that federal agents have been “knocking on doors, calling, texting, contacting family members” of anti-oil activists in the U.S.

A civil rights lawyer representing oil sand protesters in the Northwest, Larry Hildes, says that he is aware of at least a dozen people who have been contacted by the feds due to their involvement in protests against shipments of equipment north through the U.S. to Canada’s oil sands.

“They appear to be interested in actions around the tar sands and the Keystone XL pipeline,” Hildes is quoted to have said in an interview. “It’s always the same line: ‘We’re not doing criminal investigations, you’re not accused of any crime. But we’re trying to learn more about the movement.’”

At least the FBI agents appear to be polite. Helen Yost, an activist with Wild Idaho Rising Tide, said that an agent sent her this text message: “I work with the FBI. Could you give me a call back—I would appreciate it.”

Given that the FBI is supposed to investigate potential crimes, not political opinions, does the FBI believe that the tar sands protesters are gearing up for or participating in criminal activity? Panetta’s article notes that some of the activists contacted by the FBI have been involved in “megaload protests.” The WIRT website gives a straightforward articulation of the megaload protest strategy:

“Through five court cases, three dozen direct confrontations, and numerous demonstrations and monitoring activities, Idahoans and Montanans have stalled transportation of tar sands upgrader parts over our fragile rural roads and through our wildlands. Since October 2010, Imperial Oil, a Canadian subsidiary of ExxonMobil, has shipped, barged, and trucked over one hundred pieces of gargantuan, Korean-made, industrial equipment from the Ports of Vancouver and Pasco, Washington, and Lewiston, Idaho. During the next six months, Northwest interstates could be overrun by another 300 transports of these two-lane wide, 500,000-pound ‘megaloads’ escorted by aggressive, industry-sponsored state police.”

According to Panetta, some of the megaload protests have been “intermittent highway blockades set up the last few years to complicate the enormous, football-field-sized shipments of processing equipment up to the oil sands.”

Another target of the FBI visits was Herb Goodwin, who got a home visit from an FBI agent accompanied by a detective from the Bellingham, Washington police force. Apparently, the FBI intended to question Goodwin about Deep Green Resistance, a more radical environmental group that believes “the only honest solution [to global warming] is to stop industrial civilization from burning fossil fuels.” To dismantle industrial civilization’s destructive dynamic, DGR advocates “decisive ecological warfare,” which includes “sabotage and asymmetric action” and “systems disruption” leading to the “decisive dismantling of infrastructure.”

Apparently, WIRT and DGR share opposition to the tar sands oil mining, but disagree sharply over tactics and strategies—and over the transphobic beliefs voiced by a couple of top DGR activists, particularly those of DGR leader Lierre Keith, which became a controversy when she was invited to keynote an environmental conference at the University of Oregon.

Yost believes that WIRT is not a threat that would warrant FBI investigations and visits and suggests that the FBI may be trying to sow division in the anti-tar sands ranks. Saying he is not a member of DGR, Goodwin was among a dozen environmental activists from Bellingham arrested in 2011 for blocking railroad tracks to halt a coal train. He has participated in WIRT megaload protests, but says he is not a “saboteur” and his protests have been peaceful.

Hildes has advised activists not to talk to the FBI. Goodwin declined to answer questions posed by his FBI and police visitors. Yost responded to her text message from Special Agent Travis Thiede with an emphatic “no,” to which Thiede responded, “OK, I understand, just wanted to have a conversation with you. Thanks.”

How much of the FBI activity is to investigate the potential of crimes and how much, in Goodwin’s words, is simply to put activists like him “on notice” of “being watched”? As global warming worsens, and as Congress tries to gear up to override a presidential veto of efforts to approve the Keystone Pipeline, visits by the FBI to environmental activists whose strategy is civil disobedience will be important to monitor.—Rick Cohen