The Koch Bros. Meet with Other Billionaires to Plan for the Nation’s Future 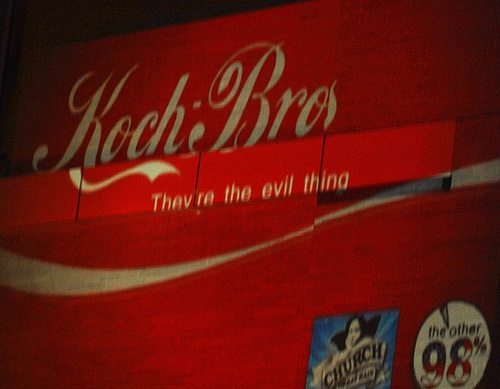 Lauren Windsor reports on a “secret” meeting of 300 billionaires convened by the Koch brothers, but it couldn’t have been all that secret people on the inside were talking to The Nation, hardly one of the Koch brothers’ favorite news outlets. Windsor acknowledged that 300 billionaires might have been a slight exaggeration, since Forbes counts only 492 in the entire nation.

She points out the obvious political dimensions of the meeting. The Kochs themselves are huge contributors to political campaigns directly and through 501(c)(4)s and PACs. In attendance were current and future candidates such as Mitch McConnell (R-KY), Marco Rubio (R-FL), Tom Cotton (R-AR), Cory Gardner (R-CO), and Jim Jordan (R-OH). Their aim, according to one of Windsor’s sources, was to raise $500 million for Republicans to take the Senate in the 2014 elections and another $500 mil to stop the Hillary Clinton presidential juggernaut.

The article comments on the ritzy resort chosen for the confab and the menu at a dinner at the late Richard Nixon’s “Western White House,” but the reality is that billionaires left, right, and of no politics at all tend to treat themselves well. More important than the filet mignon in fresh green peppercorn sauce served on mint quinoa is the political strategy that the Koch-invited billionaires discussed.

For nonprofits, a very interesting part of the program featured Michael Lomas, the president and CEO of the United Negro College Fund. Lomax and the UNCF, Windsor notes, have “faced a storm of criticism” for taking a $25 million donation from the Koch brothers “to create a special ‘Koch Scholars’ program emphasizing entrepreneurialism and free markets.” Some critics have advised Lomax to return the money to the Koch brothers, as the Kochs’ ideological positions would, by virtue of shrinking governmental social programs, undo the progress blacks have made in the United States in recent decades. Lomax defended the organization’s acceptance of the grant recently in an interview published by the American Enterprise Institute, making some interesting connections between him, the UNCF, and the Kochs. He noted that Koch support of the UNCF goes back to 2005 when the Kochs acquired Georgia Pacific, which had been one of the Fund’s supporters.

Lomax described this massive new grant as reflective of the UNCF’s recently revised tagline, “A mind is a terrible thing to waste, but a wonderful thing to invest in.” He suggested that his approach to the Koch grant was as a “pragmatist”: “If I can agree on something meaningful with folks that I don’t agree with on other things, I’m going to try to work on what we agree on and, hopefully, build a meaningful and productive relationship.” Many “mainstream” nonprofits in higher education and the arts, apparently just as pragmatic as Lomax and the UNCF, have benefitted from large grants from Koch family interests, including City Center of Music and Drama in New York City, the Prostate Cancer Center in Santa Monica, New York Presbyterian Hospital, Children’s Hospital in Boston, the American Red Cross, the New York City Opera, Catholic University, Florida State University, and many more.

This “signature” scholarship program, as described by Lomax, emphasizing entrepreneurialism and free markets, doesn’t look like a difficult fit for the UNCF. Lomax himself is a board member of KIPP schools and Teach for America, hardly on the anti-corporate left wing of educational policy. Despite Lomax’s contention that the UNCF doesn’t allow itself to be politically or ideologically pressured by donors, economist Julianne Malveaux is unsparing in her characterization of the ideas behind the Koch grant: “Koch scholarships will be awarded to students with…an interest in studying how ‘entrepreneurship, economics and innovation contribute to well-being for individuals, communities, and society. Sounds like conservative free markets to me,” Malveaux writes. “More than that, it sounds like granting scholarships to further the Koch government-reducing, free market focus. Koch protects its interest by having two seats on the five member scholarship committee, with the other three from the UNCF.” Legally and ethically, donors like the Kochs cannot have a controlling interest in the uses of their donation, thus their minority position on the advisory committee.

Describing the grant as a “deal with the devil,” Malveaux, who until recently was president of Bennett College, an HBCU, astutely notes the bind that some minority-led institutions face. “If the Koch brothers are the devil, then most of our organizations are making deals with the devil. Look at the list of sponsors for any African American organization or event. Sit through a board meeting, and listen to folks review possible sponsors, many corporate.” Echoes of the NAACP’s dalliance with Donald Sterling of the Los Angeles Clippers are not hard to hear.

Reflecting information she must have gotten from her unnamed sources, Windsor remarks about the secrecy of the event, the tight security with “checkpoints at every entrance to the resort,” Koch employees serving as escorts for guests, and a no-cell-phone policy. She asks, “Why such secrecy if the Koch’s initiatives really are in the best interest of the public at large? Wouldn’t everyday Americans heartily embrace new proposals to improve the economy and their government?” Windsor could make the same point about gatherings of rich donors on the left as well as the right, and donors who choose to keep their identities secret for any number of reasons. Would Windsor call for the left-wing billionaire counterparts to drop their secrecy as well?

Let’s hope that in this instance, Windsor’s call for public debate over what wealthy donors do with their charitable (and political) contributions is meant to be broadly construed and not limited to the Kochs. The political and ideological strings of Koch grants are legitimate issues for public debate, as in the case of the $25 million for the UNCF. The same goes for any other billionaire grants. Let’s open the doors to what the nation’s billionaires of all stripes are planning for the 317 million Americans who aren’t quite in that economic class. Let’s debate what the billionaires want and see whether it squares with the 99.9998 percent of Americans who aren’t ranked by Forbes with billion-dollar bank accounts.—Rick Cohen