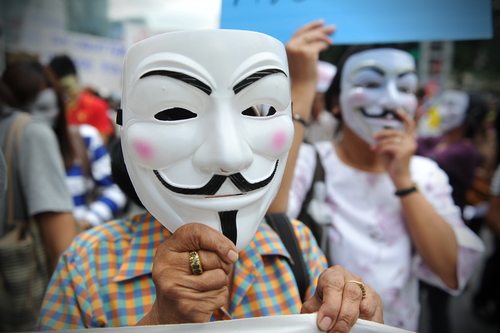 November 5th was Guy Fawkes Day. Famous today as the inspiration for the face of the Anonymous mask, Fawkes was one of several Catholic conspirators involved in the famous “Gunpowder Plot” to kill the Protestant king of England. Fawkes was captured, tortured, and then died by jumping off the gallows and breaking his neck before he could be hung.

Anonymous has kept Fawkes alive as a symbol of modern protest against fascist government, drawing on the character wearing the Fawkes mask in the V for Vendetta film based on the graphic novel by Alan Moore. It must have been something of a shock to Washingtonians, perhaps even President Obama, to see a street full of mask-wearing marchers proceeding from the Washington Monument to the White House. Convened to participate in a march against “Billionaires who own banks and corporations who [sic] corrupt politicians who enslave the people in injustice,” the marchers chanted, “Obama. Come out. We’ve got some s*** to talk about” (asterisks in the NBC News original).

The pictures accompanying a Washington Post article on the march don’t give a sense of a large turnout, at least in terms of the protest at Lafayette Park across from or in front of the White House. Both NBC and the Post reported that several marchers carried signs critical of the government’s use of the National Security Agency’s domestic surveillance programs, but the Post reported that, as in many protests, other causes were also represented, including opposition to genetically modified foods and nuclear power.

The hacktivist group Anonymous actually called for the “Million Mask March” to occur in hundreds of places around the world—reportedly as many as 430 to 450, depending on the source, including Fossil Bluff in Antarctica. The few hundred marchers in Washington were matched by 50 to 80 or so in New York City, plus marchers in London (where actor/comedian Russell Brand called on masked marchers to revolt rather than vote), about 15 in Dallas, a number in Capetown, South Africa, a “few dozen” in Tampa, and an estimated 200 in Tucson, Arizona, just to name a few of the sites.

In this march against the billionaires who own banks and corporations, the purchase of Guy Fawkes masks has a somewhat contradictory corporate pedigree: Due to the film, the Post and the Gothamist reported that Warner Brothers earns a licensing fee for the sales of Guy Fawkes masks.

Regardless of the varying numbers of marchers, the question is: a march toward what end? As hacktivists, perhaps Anonymous might have focused its attention to the NSA surveillance question more specifically, pushing for more aggressive reform and control of NSA spying activities than the White House and some in Congress seem prepared to consider. But the message was diffuse. Writing for the DCist, Matt Cohen commented, “What exactly are they protesting? Everything, I guess.” According to the official ‘Million Mask March’ Facebook page, organizers write that the mission statement of the march is to ‘remind this world what it has forgotten, that fairness, justice, and freedom are more than just words.’”

A writer for WebProNews was much tougher on the march organizers: “The most effective thing this march does is put money into the hands of Time Warner, the company that owns the rights to the Guy Fawkes image worn by all the protesters…While it may be true that Anonymous is one of the most influential groups in the world, this march is nothing more than typical American grandstanding. Anonymous should stick to their hacking ways and leave organized protest to those more socially adept.”

If you were part of the Million Mask March, wherever you might be, tell NPQ your story: What brought you to the march, what were you protesting, and what do you think the march accomplished?—Rick Cohen