The Mixed Legacy of Rajiv Shah at USAID 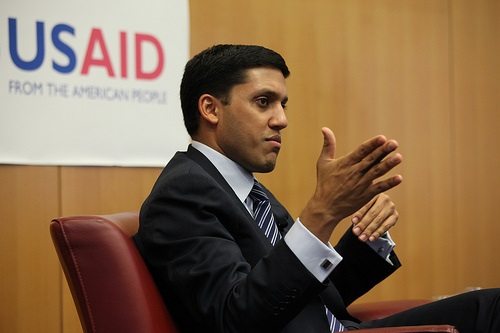 The youngest director ever of the U.S. Agency for International Development (USAID), Rajiv Shah, is ending his five-year stint at America’s humanitarian assistance arm. Devex’s excellent reporter Michael Igoe, as good as they come on international aid issues, reviews Shah’s history, impact, and legacy, an article well worth reading on its own merits. For our purposes, we are highlighting some specific issues.

First, to his credit, Shah inherited the mantle of a troubled agency. Senator Patrick Leahy (D-VT), a big supporter of USAID and foreign aid in general, had warned Shah that he had to fix USAID’s “culture of arrogance” and “disturbing detachment” with a propensity for “writing big checks for big contractors and high-priced consultants” while “churning out self-serving reports.” That was from a friend of the agency. In addition, however, Shah faced a situation of USAID’s long-tanking budget and sharply reduced staffing, forcing it to increasingly rely on the contractors that Leahy correctly suggested were part of the problem.

To be fair to Shah, humanitarian aid constitutes a very small part of the federal budget, but gets outsized negative reactions from members of Congress and from the public who believe that huge amounts of money are being shipped overseas that could be spent at home. In that political environment, the fact that Shah succeeded in protecting much of the USAID budget and was able to generate new attention to agency staffing needs is important. It should be noted, however, that President Obama’s budgets from the very beginning called for restaffing USAID rather than relying as much as it had on contractors and intermediaries. Igoe indicates that Shah was seen as a bipartisan leader of the agency, garnering positive remarks from the likes of Senator Lindsey Graham (R-SC) due to his commitment to spending time with legislators on both sides of the aisle.

Igoe devotes a section of his piece to the Shah “localization” agenda that would direct a larger proportion of USAID resources to NGOs and government agencies in the recipient countries rather than simply cutting big checks to big US-based contractors. He notes that the contractors got Rep. Darrell Issa’s (R-CA) attention around their contention that they were being “demonized for providing services they had been asked—and paid—to provide” and that the localization policy would shift money to “unaccountable and often corrupt foreign governments,” as Issa put it in a letter.

Issa might have been better advised to look at some of the larger contractors, both nonprofit and for-profit, and understand that under Shah the agency began some important accountability reforms looking at the behavior of large contractors, including nonprofits such as the Academy for Educational Development, which NPQ covered several times, including USAID’s suspension of the NGO and eventually AED’s dissolution and sell-off to Family Health International, and more recently, International Relief and Development. While important starts in better USAID oversight, there are other contractors, including for-profits, that probably merited equal if not tougher oversight, particularly in the wake of what Leahy called USAID’s “cockamamie” secret Cuban Twitter scheme.

Particularly striking about Igoe’s article is his reference to Shah’s “never-ending list of new priorities and new requirements pressed upon the agency staff,” which some staff referred to as “management by initiative.” The concern is that Shah “relied too much on one-off priorities that may not proceed beyond the pilot phase or the current administration.” One wonders whether “management by initiative” that leads to the charge of “initiative fatigue” is just a problem of Shah’s style or, as we have suggested, reflective of the deterioration of policy-making in the U.S., not just under the Obama Administration, but for many years.

As we wrote in our review of President Obama’s FY2016 federal budget proposal, it “is public policy by demonstration program”:

“Rather than having broadly available programs to people in need, public policy has devolved into narrowly constructed, one-off…demonstration efforts. In this policy environment, nonprofit policy advocates end up having to lobby not for programs, but for the next iteration of demonstrations with the hope that their constituents can benefit from demonstration to demonstration…Why does government operate this way, especially when the demonstrations…might end up cannibalizing existing funding streams? Some might say it reflects the sorry state of public policymaking in this nation, where gridlock prevents doing anything more significant. Others might say it is due to budget constraints that make short-term demonstration efforts that are limited in number easier to mount than real programs. In either case…these demonstrations all demonstrate something else—a sad policy trajectory…”

Shah may or may not share credit for improvements in USAID operations, some of which were planned or already underway before he took the chair, or for USAID’s shortcomings, several that he inherited and as an agency director might not have been able to single-handedly overcome. But the USAID program design environment, emphasizing short-term, demonstration-oriented initiatives, may be indicative not of Shah’s shortcomings, but a pre-existing policy environment into which Shah fit well.—Rick Cohen