The Occupy Movement at the End of 2013 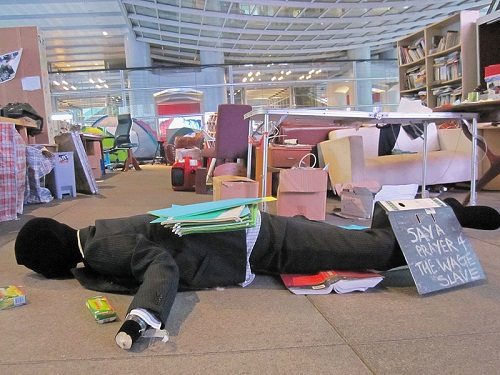 Regardless of what one might have thought of the Occupy Wall Street encampment in New York City’s Zuccotti Park or its replications in cities throughout the U.S., the term “Occupy” has become an evocative word of choice of non-U.S. organizers whose aims involve political or economic democratization. One example is the evocative nature of “Occupy” in Hong Kong. Led by Benny Tai Yiu-ting, a Hong Kong University law professor, Occupy Central is planning a protest in the heart of Hong Kong to involve as many as 10,000 people advocating for significant political reforms, initially focused on universal suffrage for choosing the Hong Kong chief executive, still largely limited, if not dictated, by the government of China.

One of Occupy Central’s steps toward the ultimate protests shutting down traffic into central Hong Kong slated for 2014 is what Tai calls “deliberation days,” in which participants discuss and decide on the political reform tenets they will advocate. Some 60 Hong Kongers who live in Canada actually participated in a deliberation day gathering in Toronto last month, and many are pledging to return to Hong Kong to join Occupy Central if and when the protest proceeds next year. “Having enjoyed the precious Canadian democratic system for so many years,” said Annie Fong, who has lived in Canada for 25 years, “I think I should support [Hong Kong’s] universal suffrage fight.”

In Nepal, the Occupy Baluwatar movement has had significant success in protesting “the government’s apparent failure to deliver justice for crimes like rape, domestic violence and persecution,” particularly where the victims seem to have been mostly from lower castes and the poor. Recently, Occupy Baluwatar leaders met with the Chief Justice of the Nepali Supreme Court and current interim head of the government, who lauded Occupy “for bringing the issues of human rights, social injustice and rule of law to the forefront that galvanized nationwide debate and caused everyone to reflect on their role as a citizen.”

Where is Occupy in the U.S.? Much of the recent press coverage involves Occupy participants in the courts protesting their treatment by the authorities who cleared out their encampments in 2011 and 2012. For example, the Fourth Circuit Court of Appeals recently ruled that South Carolina Governor Nikki Haley’s eviction of Occupy protesters from the State Capitol grounds violated their First Amendment free speech rights. The Oakland California City Council has agreed to pay $693,000 to settle two lawsuits filed by Occupy participants charging police brutality. A recent New York City case led to an OWS participant being awarded $82,000 for an alleged beating at the hands of a policeman.

Some additional coverage addresses Occupy-related charity acts, such as Occupy Madison’s efforts to work with local churches to place mobile homes in their parking lots as temporary shelter for homeless families, though only a couple of mobile homes per parking lot, and permitted only so long as they are moved every two days. At the New Year’s Day Rose Bowl parade, following the 45 official parade floats, there were plans for as many as three unofficial Occupy floats sponsored by the “Occupy Fights Foreclosures” group based in Los Angeles. The Occupy group has received some criticism from erstwhile allies because of its cooperation with the Pasadena Police Department in getting its parade tailing floats along the route.

As the Occupy protests in Hong Kong and Nepal demonstrate, when focused on core economic and political democratization, the Occupy movement has symbolic power, particularly when it coalesces around core policy recommendations. Last month, in Psychological Science, researchers examining the trajectory of the Occupy movement in the U.S. wrote, “The inability of liberal Occupy Wall Street protestors to achieve consensus on vital issues ultimately contributed to the movement’s failure to develop solidarity and enact political change.” Basically, the somewhat anarchic DNA of the Occupy movement ensured a result of political fragmentation, evident in the 23 disparate “grievances” enunciated by the General Assembly of OWS in Zuccotti Park.

Occupy’s overseas doppelgangers, with their emphasis on democratization, still suggest something positive for American activists. Despite increasing inequality and elections still dominated by moneyed interests, the theme of democratization has yet to galvanize into a broad-based movement in the U.S. There have been some post-Occupy follow-ups that have tried to maintain a consistent response on aspects of political and economic inequality, such as Occupy the SEC, which has peppered the courts, Congress, and the SEC itself on issues such as Dodd-Frank, the Volcker Rule, and other controls on out-of-control corporate and banking power. During the heyday of the Occupy movement, there were indications that many of the participants were sympathetic to campaign finance reform, which could have been adapted to a state-based organizing model outlined by Harvard University law professor Lawrence Lessig. Unfortunately, coalescing around political-campaign democratization simply didn’t happen.

Democratization with the nomenclature of “Occupy” animates people in Toronto, Hong Kong, and Kathmandu. The U.S. needs a movement not of anything-goes anarchy, but grassroots democracy, if political and economic inequality will be anything more than a temporary 2014 election meme.—Rick Cohen