May 18, 2011; Source: The Onion | When social conservatives rant against Planned Parenthood – which spends only 3 percent of its resources on abortions – some might imagine the nonprofit designing sprawling abortion facilities in locales such as rock-ribbed anti-abortion Topeka, Kan.

The Onion puts social conservative nightmares on paper with the announcement of an “Abortionplex”, fake-quoting Planned Parenthood’s president as saying, “Although we've traditionally dedicated 97 percent of our resources to other important services such as contraception distribution, cancer screening, and STD testing, this new complex allows us to devote our full attention to what has always been our true passion: abortion.”

The Onion satirists note that, “Hundreds of on-site counselors are also available to meet with clients free of charge and go over the many ways that carrying a child to term will burden them and very likely ruin their lives.” 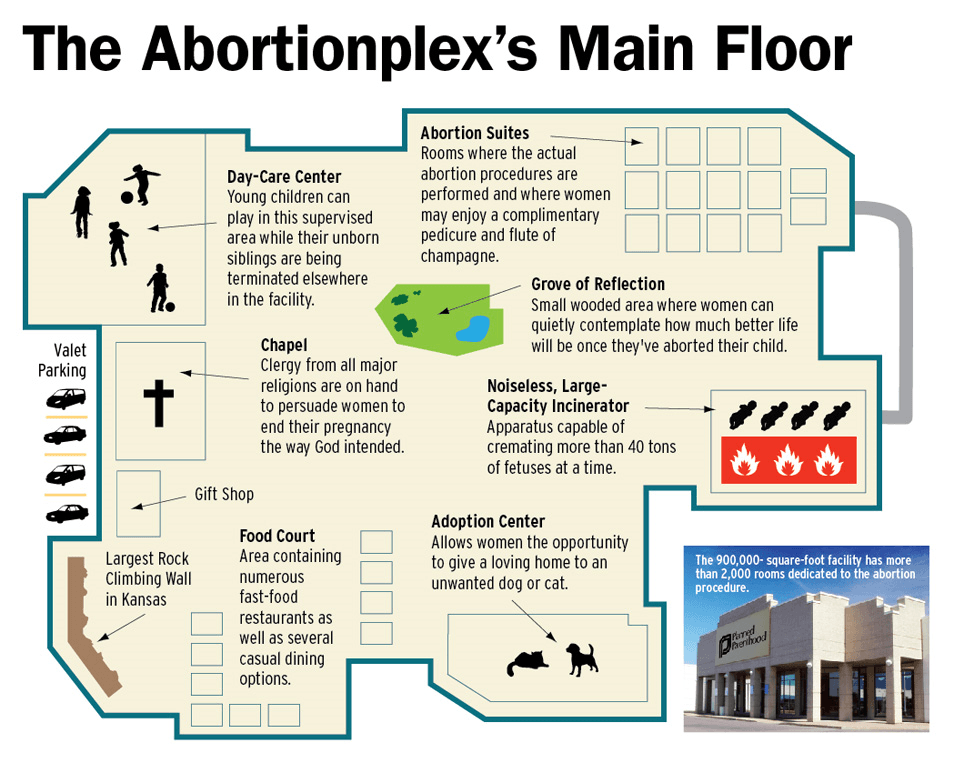 The Abortionplex Floor Plan, image by the Onion

On the main floor of the imaginary Abortionplex, there would be a day care center to tend to children while their moms are in surgery, “abortion suites” in which women will have abortions and a flute of champagne, a food court, and a rock climbing wall. Elsewhere in the facility would be bars, coffee shops, restaurants, retail outlets, a three-story nightclub, and a 10-screen multiplex theater.

Uh, dear social conservatives, this is a satirical article from The Onion. This is satire, along the lines of “The Simpsons,” the Ig Nobel prizes, Jon Stewart, Stephen Colbert, “South Park”, and Brooke Alvarez reading the headlines on the Onion News Network. What satire like this is useful for is to highlight the degree to which Planned Parenthood’s critics have demonized an organization that provides crucial health services to women. That last sentence is not satire.—Rick Cohen