The Poultry Wars: PETA Gets in on the Chick-fil-A Fight 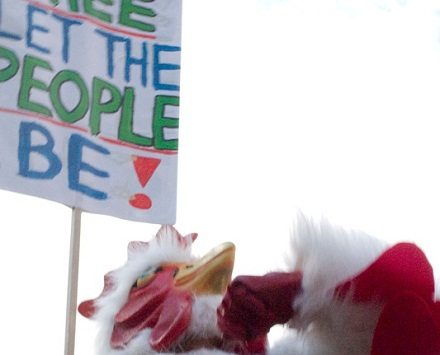 The battle over same sex-marriage continues to heat up in the unlikely venue of restaurants serving chicken sandwiches. In North Carolina, an independent Wendy’s franchise owner posted signs that said, “We stand with Chick-fil-A,” presumably a reference to the public statements of Chick-fil-A’s CEO that his company only supports traditional marriage (i.e., it doesn’t support same-sex marriage)—a statement that fast food group has backed up with millions in anti-gay donations. Yesterday, Wendy’s posted on its official Twitter account that the signs had been taken down and stated that, “We proudly serve ALL customers!”

Meanwhile, former Arkansas Gov. Mike Huckabee, now a Fox News talk show host, called for people to show up at their local branches yesterday for what he declared was Chick-fil-A Appreciation Day. The call was met with RSVPs from more than 650,000 people on Facebook and lines at the restaurants indicate that there was a lot of follow-through. This prompted calls for counter-demonstrations, including one call for a Friday night “National Same-Sex Kiss Day” at Chick-fil-A locations nationwide.

The LA Times reports that “Rick Santorum, Roseanne Barr, Sarah Palin, Conan O’Brien and a slew of mayors” have also chimed in on the issue one way or the other. People for the Ethical Treatment of Animals (PETA) also threw their organization into the mix by declaring that they would join counter-protests, issuing this statement:

“Chick-fil-A customers should deny this company their business as long as it denies gay people respect and chickens protection from blatant cruelty,” says PETA campaigner Virginia Fort. “Being a homophobe and continuing to buy chickens from suppliers who sometimes scald birds to death don’t fly in the 21st century.” –Ruth McCambridge