The Unique Protest Tactics of Dairy Farmers in Europe 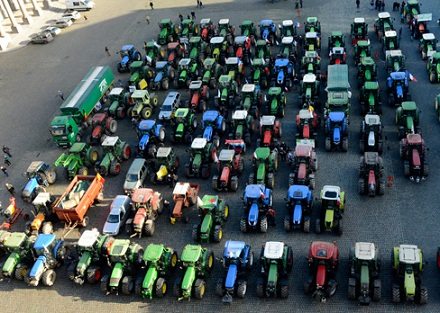 On Monday, approximately 2,500 dairy farmers from across Europe turned high-powered hoses full of milk on the European Parliament in Brussels to protest what they see as unfair production quotas and milk prices that they believe are too low. This has caused thousands of farms across Europe to fail, according to the European Milk Board. The protest was called “1,000 Tractors to Brussels” and the broadly distributed pictures from it—showing fleets of tractors in formation and police in full riot gear soaked in milk—remind us once again about the value of visually odd political theater. Some of the tractors reportedly came from as far away as Russia.

One participant, William Taylor, who is the Northern Ireland coordinator of Farmers For Action and the coordinator of Fairness for Farmers in Europe, commented, “When you see milk flowing down the streets of Brussels, it reminds you of the shortcomings of our politicians across the EU. It shouldn’t take so much for them to sort out a problem like this.” The European Milk Board, which represents dairy producers from 14 countries, organized the protests, which continued into a second day with tractors blockading some of the main roads in Brussels. It all ended by mid-day on Tuesday.

Another resource to look at when considering the power of an unusual image is “Visual Rhetoric: The Powerful Design of Nonprofit Campaigns.” –Ruth McCambridge