The Wall as Captured by Artists and Children 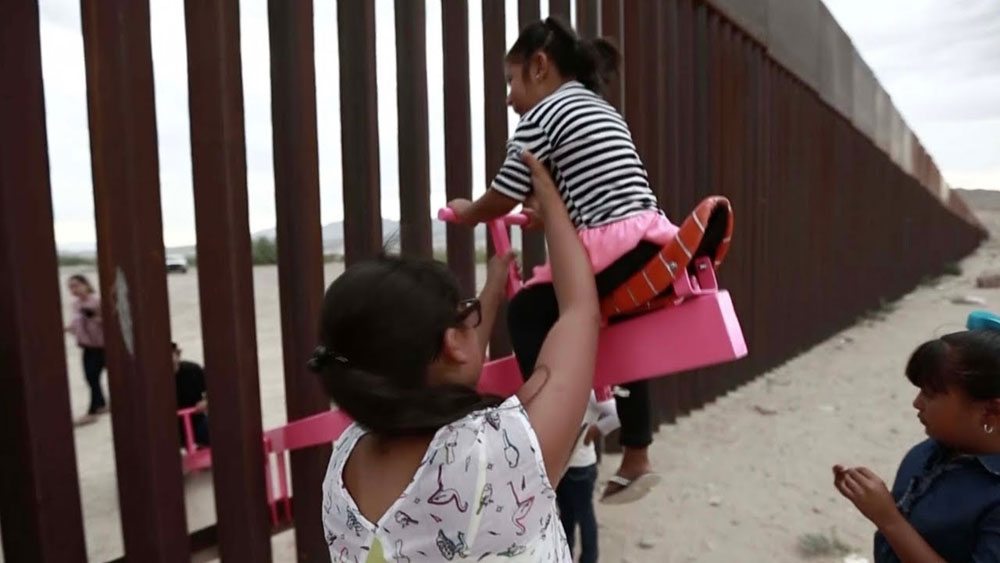 The US-Mexico border continues to be the site of a great moral and humanitarian crisis in the US. We ought not lose sight of that fact until families are reunited and children released from cages. But yesterday, for a brief 30 minutes, children on either side of the wall between El Paso and Ciudad Juarez bounced happily on teeter-totters together, swaying up and down across the fulcrum of the steel fence that separated them.

Ronald Rael, a professor of architecture at the University of California, Berkeley, and Virginia San Fratello, an associate professor of design at San José State University, came up with this concept ten years ago. It was featured in an exhibit at the Museum of Modern Art called “Borderwall as Architecture,” which asked artists to “respond to the complex circumstances brought about by forced displacement.” Rael suggested that the wall could serve as a magnet, inviting people on either side to engage in dialogue.

Rael published his own thoughts about how architects can resist the divisiveness of border walls in The Architect’s Newspaper in 2016, writing, “In its current state, the wall ignorantly bisects many culturally and environmentally rich places. Therefore, perhaps design offers the potential for the wall to be transformed into a variety of interpretations and applications, ideally ones of benefit to borderland residents.”

ArtNet described the brief installation as “a joy-filled occasion.” San Fratello said, “We were delighted with the turnout and excited to see the children having so much fun on the teeter-totters!” The pink hue of the seesaws, according to the Guardian, reflects a pastel pink color frequently used by Mexican architect Luis Barragán.

Rael’s Instagram post about the installation acknowledged the contributions of collaborators in the Anapra neighborhood in Juarez, as well as Colectivo Chopeke, which centers home as a place of refuge and recollection.

In recent days, NPQ has discussed the leading role artists have played in social protests, including in Puerto Rico and Hawaii. The border wall, a symbol of President Trump’s empty promises and enraged racism, has also become a site of resistance and reimagining by the artistic community.

There were the murals painted by Dreams Across Borders and the Wall of Faces, which commemorated Vietnam veterans and attempted to change perceptions of the wall for nearby residents. There was the “Welcome Wall,” a collaborative mural project 2,000 miles long, which drew attention to the National Butterfly Center that was threatened by the border wall’s planned route. There was the Mural of Brotherhood, which enlisted 2,600 volunteers to set the Guinness World Record for the world’s longest mural. Then there was the famous mural of a toddler painted by French artist JR, gazing at the other side of the wall through long lashes.

And now, in the same location where a GoFundMe campaign attempted to build a private wall when public efforts didn’t move fast enough, children bounced on pink toys together, showing the absurdity of such a radical divide.—Erin Rubin